As one of the rising boy groups in K-Pop, ENHYPEN has always gained praise for their talent, visuals, and personalities. However, the members are currently under fire from netizens after a recent broadcast raised concerns about the comments aimed toward member Sunoo.

In the past, the members have been criticized for some of the comments aimed at Sunoo, especially in regards to his weight, and concerns have been raised again after a recent live broadcast.

On June 19, Sunoo, Ni-Ki, Jake, and Jungwon sat down with fans for a casual chat.

Although most of the broadcast was praised and ENGENEs loved interacting with the members, one clip has gained attention from both fans and other netizens.

In the clip, Sunoo is explaining the reaction fellow member Sunghoon has whenever he walks past him. Although Sunoo said it with a smile on his face and in a joking tone, many netizens were concerned about the statement.

Every time I bump into Sunghoon hyung, he’d always say a wild boar hit him and acts like he’s going to fly away.

The members joined in with Sunoo’s laughter before Jungwon added, “The elephant one was really funny.” Although there was no context in the clip, many felt uncomfortable about it as elephants are commonly used when comparing someone with heavier animals.

Jungwon then shared another story from the filming, and it once again related to the members talking about Sunoo’s weight.

There was even a moment when they were speaking about Sunoo’s stature and Ni-Ki said, “Because he eats a lot…”

Although all the members seemed to be laughing, the comments below the video didn’t feel the same. After past comments made to Sunoo, netizens thought that the members needed to be educated more on the topic of body issues. They also expressed their concerns that, when it comes to weight, Sunoo is extremely thin compared to anyone’s standards.

Many also raised concerns that Sunoo seemed to be laughing along with the jokes. While fans pointed out that it could mean he didn’t mind the comments, others explained that it is impossible to assume how Sunoo would be feeling and why he reacted with laughter.

Many also raised concerns because it isn’t the first time the members have come under fire for allegedly “fat-shaming” Sunoo. During several appearances and broadcasts, the members have been called out for making weight-related comments towards Sunoo that have upset netizens. 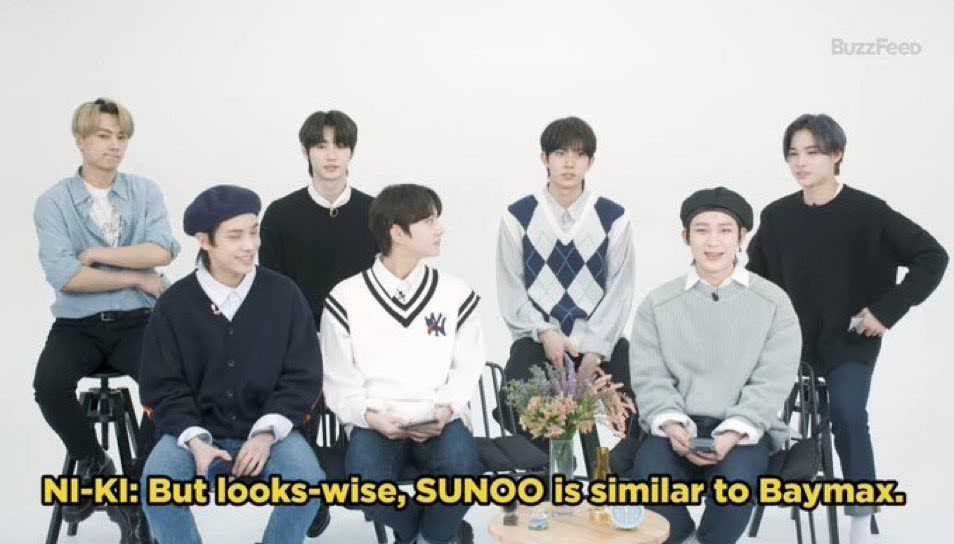 Yet, there is also no denying that the members of ENHYPEN love each other a lot, including Sunoo, and always make sure to compliment and share their love.

A MUCH NEEDED THREAD; pic.twitter.com/LBDyE4fBGT

Although netizens make it clear that they know how much the members care and love Sunoo, they want to raise awareness and educate the group on how comments on weight can be harmful.