MONSTA X‘s Kihyun recently saw a familiar face during a fansign, and his reaction revealed his true personality. 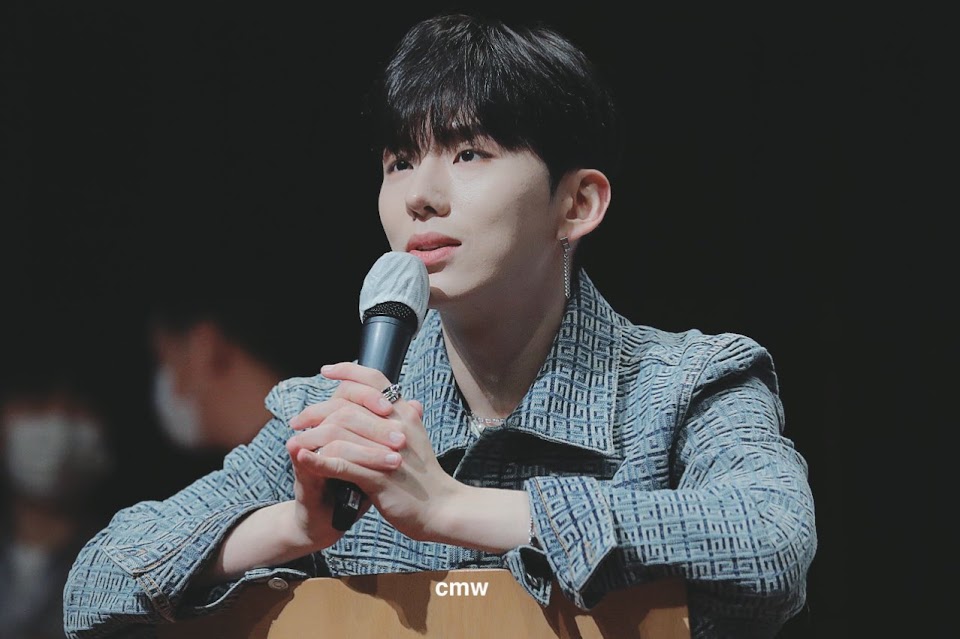 When the MONBEBE (MONSTA X fan) met Kihyun at the group’s fansign, they greeted him as any old classmate would that hadn’t seen each other in a while.

Despite the MONBEBE wearing a mask and only saying one phrase so far, Kihyun immediately recognized them!

Kihyun couldn’t have been more shocked to see his former classmate at his group’s fansign, especially since it had been so many years since they last saw each other. Still, he was able to remember them without hesitation. The MONBEBE was even in disbelief that Kihyun could remember them.

Kihyun: How many years has it been?!

MONBEBE: Mm-hmm. Around — years. It has been a while, huh?

On the other hand, Kihyun could not believe an old classmate of his was in front of him after all these years and at his own fansign at that!

His former classmate explained that they had actually originally become a MONBEBE without recognizing that Kihyun was a member of the group.

MONBEBE: I start stanning [MONSTA X] without realizing you’re in it.

Kihyun: Are you serious?

It turned into a heartwarming reunion between childhood friends after many years of separation. So, they were able to catch up even just briefly despite the unusual circumstances.

Kihyun: HOW HAVE YOU BEEN?!

After realizing MONSTA X’s Kihyun was their former classmate, the MONBEBE wanted to contact him to let him know. So, they attempted to send messages in for Naver NOW‘s Midnight Idol, which he and I.M host. Unfortunately, none were successfully received.

MONBEBE: I’ve sent so many messages to Midnight Idol but none of them went through… so I decided to come to see you myself.

Yet, it worked out in the end. A face-to-face reunion is even more special!

I mean, I guess I wouldn’t have known [who you are] from the messages anyway, but… But now that you’re here and I’m looking at you, I remember you.

Like true childhood friends and classmates, the two spoke as such. So, they reflected on the past and present.

MONBEBE: It’s so good to see you again.

Kihyun: Wow… How are you?

MONBEBE: (Talks about how they’ve been, on mute)

MONBEBE: And… I’ve been working.

Kihyun: We’re at that age—

Kihyun: Oh my gosh, it’s so good to see you. Really.

MONBEBE: (Talks about a shared memory between the two, on mute)

The MONBEBE in question shared the wholesome moment on Twitter with others. They revealed that Kihyun could identify them immediately based on the sticky tab that includes one’s name.

I came up with a hundred ways of how this fansign might go, none of which included him remembering me right away… I spent TWO MONTHS stanning him, not realizing who he is. But he remembered me right away after seeing my name and the index. I felt so bad and so grateful at the same time. I wanted to tell him that I’ll continue to support him, but I ended up talking about how I’ve been instead… That’s okay though because I wrote everything I wanted to say in the letter.

They had thought a lot about what they would say to Kihyun before the fansign, hoping to encourage him. Instead, he was just so excited to see an old friend that they chatted normally!

The MONBEBE continued the story in the Twitter thread. They revealed how they realized that the Kihyun they stan was the same as the one from their youth.

I realized that Kihyun is the Kihyun when I was fangirling over MONSTA X over at my friend’s house. And I heard that Kihyun and I are from the same part of town. And… it hit me. I went home, looked up my yearbook, and was completely dumbfounded. I asked another classmate who confirmed. The fansign left me feeling all the feels… but thanks to what happened, I made a lot of new Monbebe friends and my love for MONSTA X became even stronger.  The End

After the video went viral on social media, the MONBEBE added more context, clarifying the confusion about how they had not known their old friend Kihyun was a member of MONSTA X.

I heard that my tweet about what happened at the fansign has gone viral… ʸᵉᵃʰ TBH, this is kind of exciting because I didn’t expect my story to get so much attention. Anyway, I didn’t recognize Kihyun at first because I had lived out of the country for such a long time that I had no idea he debuted. I didn’t get to hear any updates about him in any way. So it didn’t even cross my mind to think that I might have been friends with that Kihyun. Haha.

The MONBEBE became even happier, realizing that one of their favorite K-Pop group members was their former classmate. And, naturally, Kihyun became her ultimate bias!

Once I recognized Kihyun though, I had all the memories come flooding back! So… I would like to thank him for the good throwback… As for how it feels to have a former classmate become my ultimate bias… I don’t know. It’s definitely kind of baffling. But he is the K-Pop King after all… and I actually love all six members. So it’s fine. I hope everyone has a great rest of the weekend! And STREAM LOVE!

Kihyun’s former classmate having such positive memories of him already speaks volumes. Yet, his wholesome reaction to meeting them again proves even more that he is such a genuine, humble, and kind individual. And, it turns out he has always been that way!