These accusations have since been revealed to be fabricated.

Former Wanna One member Park Jihoon has found himself in the middle of a possible controversy involving a former girlfriend.

A few days ago, a Twitter account posted series of photos of alleged messages from someone claiming to be Park Jihoon’s former girlfriend. The user shared the photos with a tweet explaining the situation.

I received some explosive DM’s from former Wanna One Park Jihoon’s ex-girlfriend. A few days ago, she saw a retweet of Park Jihoon allegedly spending tens of millions of KRW (thousands USD) on a female BJ (broadcast jockey who shows off her body.) She contacted me after seeing that. Park Jihoon gave the BJ the money using the handle name ‘Jung Hyun Ho 1,’ but he was dating his ex-girlfriend at the time. In other words, he was cheating and having an affair.

With the tweet, they shared the dozens of DM’s and photos that they received from the netizen claiming to be Park Jihoon’s alleged former girlfriend.

This first screenshot shares the allegation in a shortened format, explaining Park Jihoon’s infidelity started when he began sending a female broadcasting jockey “star balloons” during her alleged broadcasts. 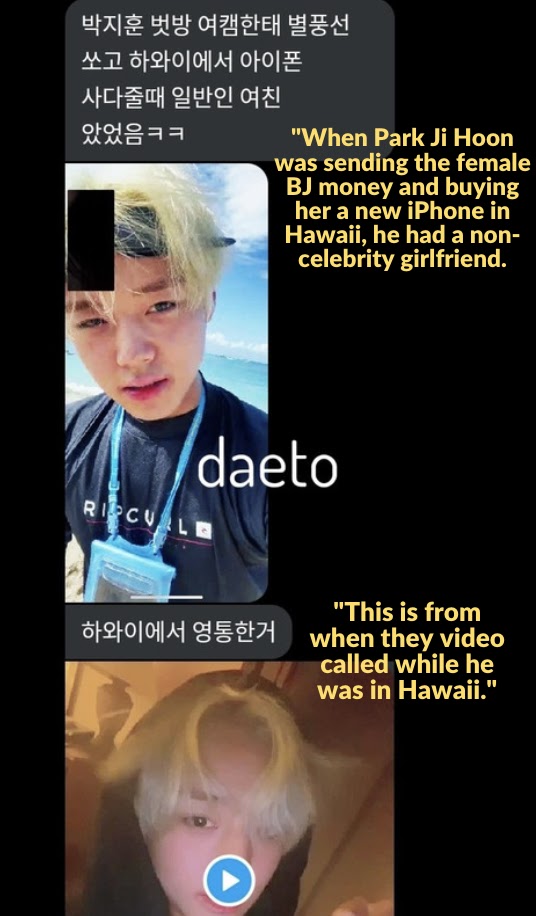 “Star balloons” are form of digital currency used on AfreecaTV, which is a video streaming service, and these balloons can be withdrawn as cash. One of these balloons can be purchased for ₩100 KRW (about $ 0.09 USD) and users can send up to 10,000 of these to their favorite BJs a day as a way to show off their love.

After sharing the initial message detailing Park Jihoon’s “star balloon” situation, the Twitter user continued to share the screenshots she received from the netizen claiming to be Park Jihoon’s former girlfriend.

Netizen: ““This footage is the video he sent his girlfriend while he was in Hawaii. It was after he sent the female BJ star balloons, bought her an iPhone, and bought matching couple phone cases with her.”
Twitter user@IllIllllIIlIIIl: “Those captures are from the video call he had with his girlfriend? How did you get your hands on it? Whoa. I thought it was something he sent to his fans…”
Netizen: “It’s because I’m the girlfriend ㅋㅋㅋㅋ”
Twitter user@IllIllllIIlIIIl: “….?”

Twitter user@IllIllllIIlIIIl: “I calculated it. He sent her about ₩8.00 million KRW (about $ 6,980 USD) worth of star balloons over two months.”
Netizen: “He bought it for her. It doesn’t compare to the money he sent her. I think he just spends money on girls without thinking. It wasn’t too long after we broke up that he would take trainee girls to Octagon (nightclub.) He would order bottles of alcohol that cost ₩2.00 million KRW (about $ 1,750 USD) and stuff.”

Another Twitter user shared this photo of the strange “coincidences” between Park Jihoon and his alias, Jung Hyun Ho.

Even more of the alleged former girlfriend’s text messages were revealed by the Twitter user, which went into even more details about Park Jihoon’s infidelity.

Netizen: “When we went to an escape room together, the name he used to reserve it was Jung Hyun Ho. I think we called a Kakao taxi or something, but when he called for a car to pick us up, the driver asked ‘is this car for Jung Hyun Ho-sshi?’”
Twitter user@IllIllllIIlIIIl: “It’s fascinating that no one recognized him…the fact that you confirmed his Jung Hyun Ho ID seems to confirm that you are who you say you are. It sounds like he was living a second life as Jung Hyun Ho.”
Netizen: “That’s how I knew it was him.”

The alleged ex-girlfriend also shared this photo of a previous Instagram story that she uploaded while she was over at the former Wanna One member’s home.

Netizen: “I uploaded this Instagram story when I was over at his place. It’s not really anything.”
Twitter user@IllIllllIIlIIIl: “His fans probably know just by looking at the setup of the place that it’s Park Jihoon’s house.”
Netizen: “Now that I’m saying it all out loud, I feel like I’m going to go crazy. In the beginning, I contemplated between saying something and keeping it to myself. I got drunk yesterday, which is why I messaged you. But now that I told you, I feel refreshed.”
Twitter user@IllIllllIIlIIIl: “I don’t f*cking understand. He had a girlfriend, but he still spent thousands on a BJ (broadcast jockey) girl.”

The netizen then shared an alleged text message between her and Park Jihoon with the Twitter user.

Netizen: “This is a live KakaoTalk. It’s not a video call. It was when I worked.”
Twitter user@IllIllllIIlIIIl: “Uh huh.”
Netizen: “I think he said it because he was in school. He has another phone. He took his phone, my phone and we made a group chat and did a live chat with it.”

Netizen: “I’ve never seen this one.”
Twitter user@IllIllllIIlIIIl: “He just figured it out after breaking up with you. He met with the female BJ. Does the timing overlap with the period when he dated you unnie?”
Netizen: “Yes.”

To conclude the accusations, Park Jihoon’s alleged former girlfriend explained to Twitter user @IllIllllIIlIIIl why she decided to expose him after all this time.