Thai MC Moddam Kachapa is under fire for comments he made about the solo debut of BLACKPINK‘s Lisa, which invalidated the successes of her fellow Thai Idols GOT7‘s BamBam and 2PM‘s Nichkhun.

On the Chae Show aired on the GMM 25 network, Kachapa was discussing Lisa’s solo release, “Lalisa”, when he began to discredit her fellow idols, saying that they’ve “never seen a [Thai] superstar go this far.” This massive insult quickly blew up on Twitter.

degree, we also have bambam, but he too didn’t manage to get this far. This (lisa’s debut) is what we call world class, truly world class, it’s finally happened to our country.”

The Twitter user who uploaded the clip of his rude comments also found a prior instance where the MC had made a similar comparison between the idols.

K-Pop fans across multiple fandoms were stunned by the MC’s behavior and by midday “#แบนมดดํา” (which roughly translates to #BanModdam) had more than 1.2 million tweets. “BamBam” was also trending with more than 550k tweets and multiple variant hashtags like “#ApologizeToBamBam” and “#RespectBamBam” being used. 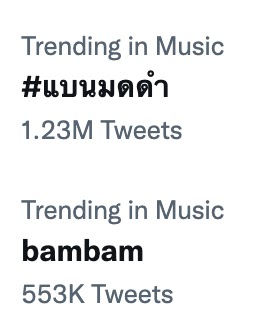 Even with all the negativity, fans rallied together to show off the successes and friendship of the three idols.

Stop creating a competition where there is none. Lisa is successful. But so are Bambam and Nickhun. There is more than enough room for these talented artists to be great at the same time. #แบนมดดํา #ApologizeToBamBam pic.twitter.com/LkG8AKFOCX

Bambam is one of the most humble person and he don’t deserve this kind of disrespect. He’s one of the most successful Thai idol and worked really hard to achieve what he have today. Respect him and #ApologizeToBamBam#RespectBambam#แบนมดดำ pic.twitter.com/c6mPobqDSB

Khun is not the one you can forget. Literally he is an icon for non-Korean idol. If not him, the chances of foreign people entering into K-pop world will be more harder. He paved the way. He work hard for the future generations. #RespectNichkhun#ApologizeToNichkhun #แบนมดดํา pic.twitter.com/R4EOrLxQrF

Moddam Kachapa uploaded an apology to his Instagram account later in the day, but many fans found this apology hollow.

“I never had negative intentions towards the two of them” yet you insulted him + compared him to other idols. that is not a “misunderstanding”, that is unprofessional.

It is unclear what will happen regarding the future of the MC. The official Instagram of the Chae Show has re-uploaded his apology, but fans continue to call for further action regarding his behavior.

I’m calling the attention of @GMM25Thailand to take action against your MC who has been disrespecting Bambam and other Thai idols. They do not work this hard in another country just to be treated like this! 🚫🖐🏻#RespectBambam#แบนมดดํา