Producer Mike Dean has once again taken to Twitter to criticize BTS and their recent accomplishments.

Mike Dean has had a 40+ year career in the music industry, including working with major artists such as Kanye West, Kid Cudi, 2Pac, Drake, and Madonna. Over his career, he has won seven GRAMMYs and been nominated eighteen times.

And now Mike Dean seems to be making a career out of trying to provoke ARMY.

Previously, he received backlash for taking to Twitter to insult BTS after Kanye West‘s album, Donda, which Mike Dean co-produced, didn’t win the GRAMMYs’ “Album of the Year.”

BTS, who were nominated for “Best Duo/Group Performance” for “Butter,” gave an incredibly captivating performance of the song that had the GRAMMYs “daring” Twitter to name a smoother group than BTS. 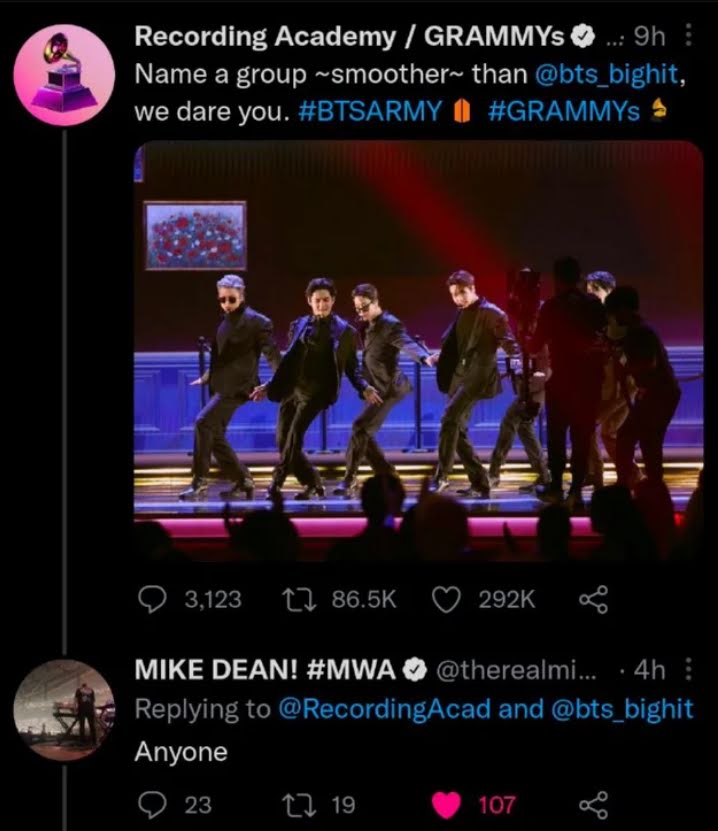 Seemingly frustrated by his loss, Mike Dean replied to their tweet, claiming that “Anyone” would be smoother.

But Mike Dean’s criticisms didn’t stop there, with the producer continuing to focus on BTS. First, claiming that he likes to “push ARMY’s buttons” for “fun.”

And when ARMY came to defend BTS, Mike Dean continued to provoke the fans, implying that BTS’s music is not “real” music and that BTS’s fanbase comprises only young fans. 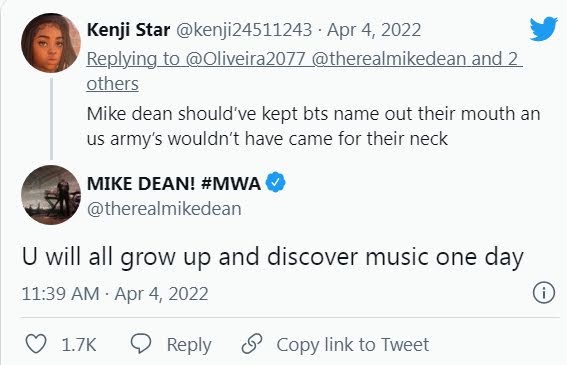 This tweet, in particular, led to a discussion about misogyny aimed at K-Pop fans. K-Pop fans encompass a wide range of gender, age, and ethnicity but are often reduced in media to “teenage fangirls.”

But ARMY were perhaps most frustrated by Mike Dean’s claims that BTS only play a minimal role in writing their own songs. 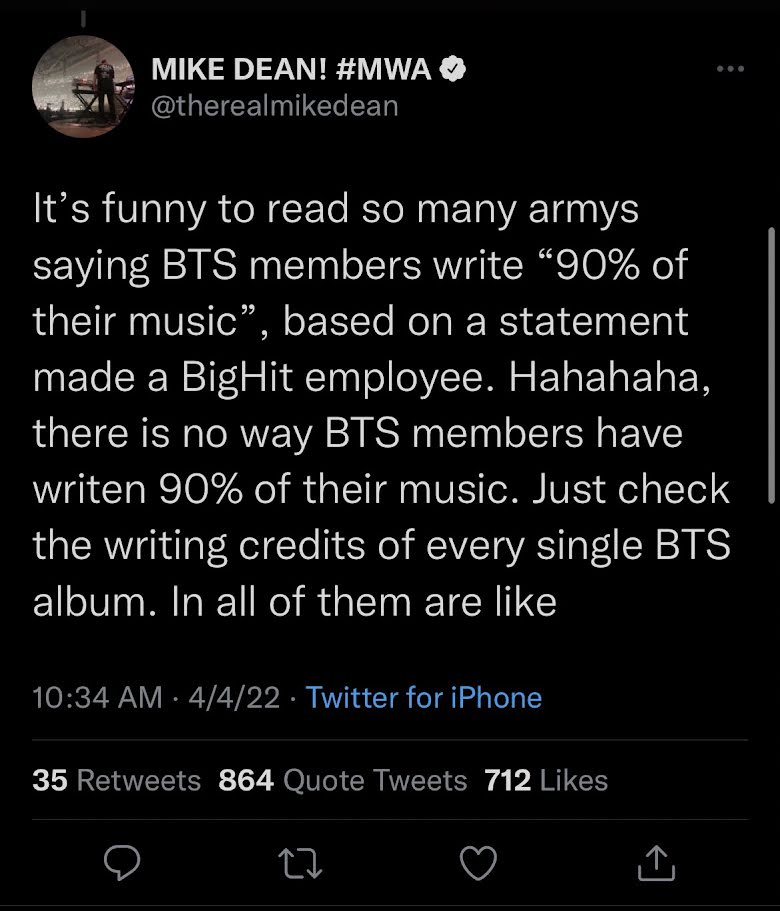 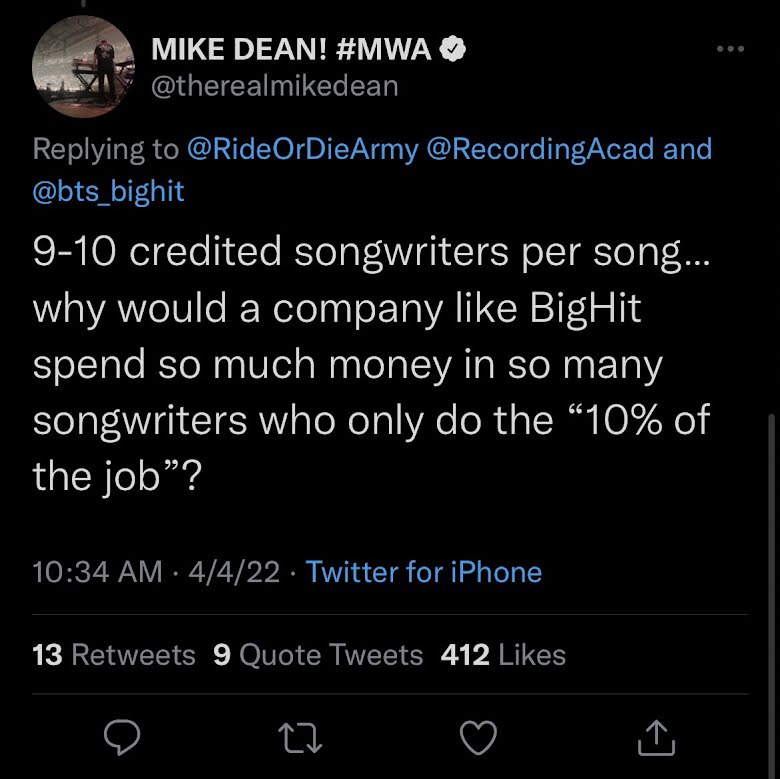 Of course, ARMY immediately came to BTS’s defense, explaining how actively involved the members have proven themselves to be in their music creation time and time again.

bts have done hour long livestreams talking about the writing process for their songs etc. look at most of their songs and you’ll see at least one members name written there for writing credits. don’t ever fix your lips to discredit bts and their writing again

And BTS producer Docskim also came to the group’s defense, proving their involvement in their music process.

As a keyboardist/producer and fan of hip hop, I’m inspired by @therealmikedean. He’s one of the legends.

BTS are my little brothers and amazingly talented guys.

Just disappointed that someone I look up to said those things.

But definitely not okay.

Mike Dean eventually did tweet an apology and an explanation for his actions. He claimed that he was simply “trolling.”

And that he was mad about the 2022 GRAMMYs’ results for “Album of the Year,” which caused him to make tweets he shouldn’t have.

But despite his then apologies, Mike Dean has taken to Twitter once again, after the recent release of BTS’s anthology album PROOF, to make snide comments directed at the successful group.

A Kanye West fan account pointed out a similarity in BTS’s “Yet To Come” song and music video that seemed to pay homage to Ye’s “Touch the Sky.”

BTS paying homage to Kanye West in their new song “Yet To Come” #BTS #BTS_YetToCome pic.twitter.com/nGLyDPnv9c

As BTS have been supporters of Kanye’s music in the past, fans took the hommage positively.

“The level of it was so different to the performances that I’ve seen back then. It wasn’t music, it was pure art. It’s Kanye. There’s no need for words, because anything he does, it’ll become a trend”
– Min Yoongi (BTS) 2016 pic.twitter.com/auMKwNUQWZ

My ears perked straight up on sight during the drop, this wasn’t lost on me… I see you Joonie…#BTS_Proof #YetToCome pic.twitter.com/QjFNKA5536

And even started hoping for a possible collaboration between the two artists.

i don’t even listen to bts like that but a kanye X bts colab…… https://t.co/VDeWSGEfNS

However, producer Mike Dean seemed to take the hommage in a different direction, replying to the account that he “[hoped] they cleared the sample” since the lyrics are so similar. 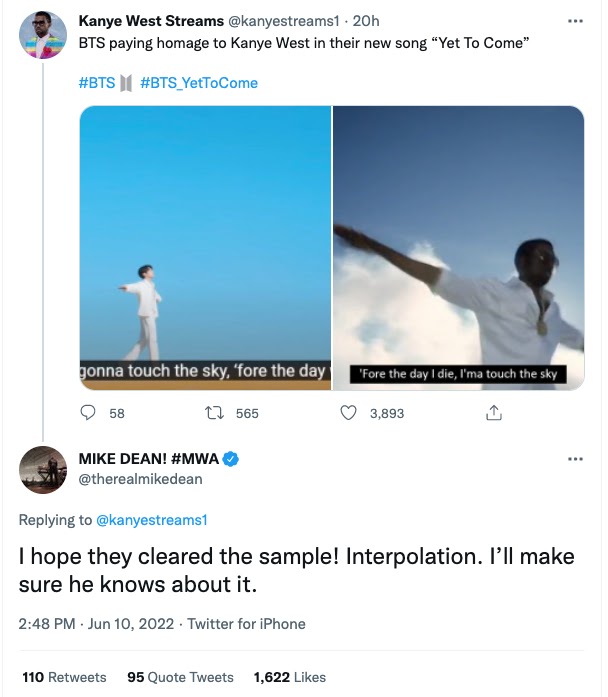 Since Mike Dean has worked closely with Kanye West, he also promised to “make sure [Kanye] knows about it.”

He defended his comment that he thinks it’s important that BTS have “cleared the sample” because it “costs money.” 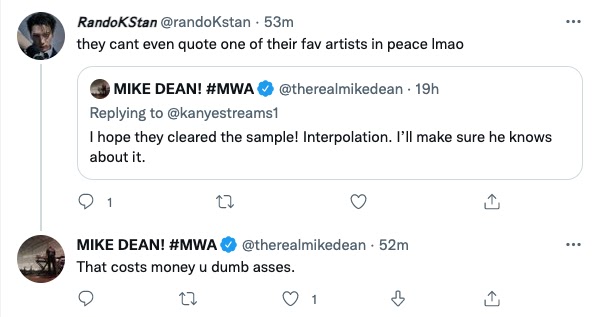 In other replies to different tweets, Mike Dean went on to say that he doesn’t “give a sh*t” about what others think of him.

And he seemed to imply that BTS makes “sh*t pop machine music” and are wasting their time by doing so.

Mike Dean has also liked a tweet that indicates that he intends the hate he expresses for BTS since he is “too old to be [just] trolling.”

And he also liked a tweet that alleges that BTS’s streams are from robots instead of actual fans. 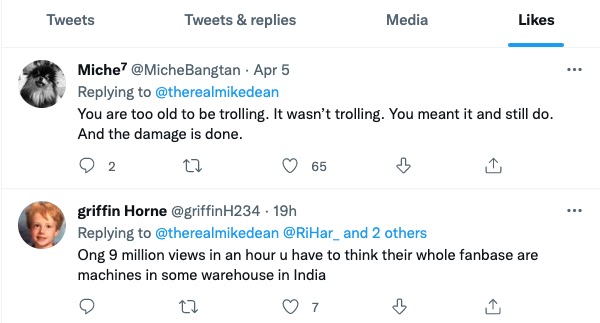 As of when this article was published, ARMY seem to be largely ignoring the producer and not giving him any of the clout he may be trying to gain through his hateful tweets.

8 People Who Dug Their Own Graves By Dissing BTS