American–South African–Canadian entrepreneur, investor, and business magnate Elon Musk may have revealed himself to be a member of the BTS ARMY!

Yet, the way he did it was unconventional…

On June 4, Elon Musk shared a controversial post on Twitter. It featured a meme of “Things I’ll never see in my life,” including a fire-breathing dragon, a dinosaur, a unicorn, and text reading “The Epstein/Maxwell client list.” This is in reference to infamous billionaire pedophile Jeffrey Epstein. Musk is questioning why the Justice Department has not yet leaked Epstein’s client list, potentially exposing others.

The Justice Department came under scrutiny after it was revealed it conducted several leaks and borderline aggressive investigations on reporters and adversaries of then-President Trump.

During her trial last year, Ghislaine Maxwell turned down a deal offered by the prosecution that would have lessened her sentence in exchange for the names of those in Epstein’s sex trafficking network.

Maxwell maintained her innocence throughout the proceedings but was convicted in December. A bid to appeal the conviction was dismissed in May.

Sometimes I think my list of enemies is too short, so …

Musk replied to his original tweet, acknowledging that it was controversial and may make him enemies. So, he tweeted, “Sometimes I think my list of enemies is too short, so …” Dogecoin‘s original creator Shibetoshi Nakamoto replied, advising Musk just to be careful about what he says about BTS.

Shortly after, Elon Musk replied to Nakamoto, revealing he actually is a fan. He thinks the group’s music videos are fire!

Even Musk recognizes the power of BTS and ARMY!

Even so, it’s not surprising that Elon Musk could be a member of the BTS ARMY himself. BTS’s music is top-tier, but they advocate for sustainability as well. 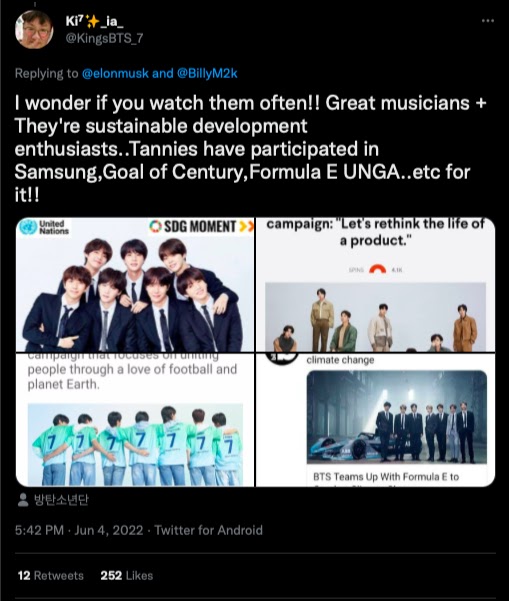 And, Musk’s ex and co-parent Grimes is a known K-Pop fan and even friends with BLACKPINK‘s Jennie.

While Elon Musk may be ARMY himself, ARMYs actually have mixed feelings about him… Read more below: