ARMY is calling for better treatment for BTS‘s Jimin following the final tracklist release for the upcoming anthology album PROOF.

ARMYs were initially excited as we often dream of hearing the original versions of the songs we now know and love. 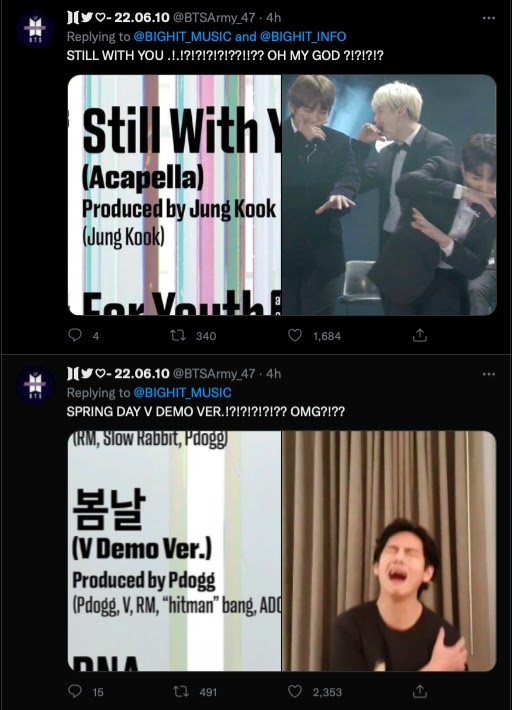 Everyone is especially excited about Agust D (Suga)’s “Tony Montana,” featuring Jimin. The song originally featured Yankie and was released on August 16, 2016, as part of Agust D’s mixtape. He famously performed it with Jimin at BTS 3rd Muster, and ARMYs have hoped for an official release ever since.

Tine to bring back this Tony Montana performancepic.twitter.com/8yBVXGkzqw

Yet, it will just be available on CD3 and through CD only. So, no online streaming will be available.

Still With You and Tony Montana: 🤩
CD only: 😔

Yet, that’s not the only disappointment.

Upon closer inspection, ARMYs noticed that Jimin was technically the only member not to have a solo song included in the PROOF CD3 tracklist. Five members have demo versions of songs, and Jungkook has an acapella version of his solo “Still With You.”

It appears that Jimin’s represented through “Tony Montana.” Yet, that is a song by Agust D. So, while Suga has “Seesaw,” technically, “Tony Montana” is his too.

Not only that, but Jimin is not even credited for writing his part, at least on the tracklist posted. Instead, only Agust D, Pdogg, and Supreme Boi are credited writers and producers.

Now, you’re not supposed to claim Jimin’s rights to Tony Montana, because he’s the one who wrote his part and spoke himself about the case #WhereIsJiminsDemo#FreeJiminFromHybe#[email protected]_bighit @BIGHIT_MUSIC pic.twitter.com/nVij0WOh59

Naturally, ARMYs are confused and disappointed. Many are upset on behalf of Jimin as they feel that HYBE is allegedly not treating the seven members equally.

how is that fair? or in any way equal representation of all members in a bands’ anthology album? if you srly believe jm wouldn’t want his own demo version(s) to be included you clearly don’t know him at all! #BeFairToJimin

Jimin is not only a talented singer and dancer. He also is skilled with it comes to producing his own music.

jimin has always enfforted since debut, he treats fans the best way, he LOVES dancing, he LOVES singing, jimin is an artist who composes, produces. And he gives us amazing music, he deserves to be treated with respect and given the right opportunities.

Jimin released his first self-composed song, “Promise,” in 2018. Yet, it was not included. And we know there are likely many more songs he has yet to share with us.

Even the tracks are not included on streaming platforms we would love to see jimin having his own demo or this English version still jimin worked so hard writing promise why he can’t get the same treatment as the other members?#BeFairToJiminpic.twitter.com/wVeeqZQk0o

ARMYs are concerned about the treatment of Jimin within the company after noticing that he appears completely disregarded.

It’s something weird going on there regarding how they’ve handling Jm’s career, some uglee internal politics or whatever! I just hope he’s in a equitable working environment!#BeFairToJimin https://t.co/khxvJZokMw

Many feel that trending hashtags never get them anywhere and that no progress is made.

I don’t like these hashtags because it never solved anything but we can’t just be quiet and accept this treatment for Jimin. This is unfair and he deserves better! I hope more ppl wake up and realize that this has been going on for a long time and not just today.#BeFairToJimin

Still, most ARMYs think it is better to make some effort rather than sit back and do nothing when a member is allegedly not receiving respect or fair treatment.

I wish these tags changed something though but nothing wrong with doing something at least 😭#BeFairToJimin #FreeJiminFromHybe pic.twitter.com/h6eRHfJYPf

At the time of writing, “#BeFairToJimin” and “#FreeJiminFromHybe” have 25.6K and 9,729 tweets, respectively.