NCTzens were excited to hear NCT‘s Johnny would be attending the Metropolitan Museum of Art’s Costume Institute‘s 2022 Met Gala (also known as Met Ball) during his NYC trip.

It was especially awesome since he practically manifested it years ago.

one thing 127’s gonna do is manifest the hell out of something and have it come true in 2-3 years’ time https://t.co/yr5j1UYCXC

Considering Anna Wintour herself approves all attendees, it is an especially high honor.

for those who talk shit about johnny attending met gala pic.twitter.com/i1GLe2B3nj

The theme of this year’s Met Gala is In America: An Anthology of Fashion, focusing on gilded glamour, and since Johnny is a successful Korean American styled by a brand owned and run by Asian Americans, it seemed very fitting since it is Asian American and Pacific Islander Heritage Month.

The stories really reflect the evolution of American style, but they also explore the work of individual tailors, dress-makers, and designers. …We’ve been exploring untold stories and focusing on designers who have been almost written out of fashion history because they weren’t commercially successful or they had a short career span, but at the time had a big impact on American fashion.

Is #Johnny wearing a simple look? Yes! However, it‘s the modernized version of the theme by utilizing regality and wealth in fabrics and cuts. That‘s what Peter Do wants his brand to be known for – redefining modern luxury! #MetGala pic.twitter.com/q3cEb8So2H

Yet, he still became the victim of racism that night.

The paparazzi directed the celebrities to pose for photos on the red carpet. Being in a crowd of people with so much noise, especially with cameras and flashes going off, can be overwhelming, and one can’t hear everything. Still, one paparazzi got especially impatient.

Johnny from @NCTsmtown just said hi to us at the #MetGala and I’m freaking out! pic.twitter.com/8kopnZR6G5

After directing Johnny to move so that he could get a better picture, a paparazzi became annoyed when the K-Pop idol did not change his pose immediately.

Johnny Suh, over here! On this side, please!

Thus the man muttered, “He doesn’t understand a word I’m saying.” He assumed that since Johnny was not responding to his direction immediately and was Asian, he must not understand English.

The original poster of the video @dygenre didn’t realize until after their video went viral that the man next to them had said something racist about Johnny.

Originally, the NCTzen posted the video expressing their excitement about seeing Johnny.

JOHNNY I LOVE YOU SO MUCH #MetGala #MetGala2022 #JOHNNY #NCT127 pic.twitter.com/GI0AZAnacJ

Yet, shortly after posting, the video blew up but for unfortunate reasons as viewers noticed the audio including the paparrazi’s racist remark. 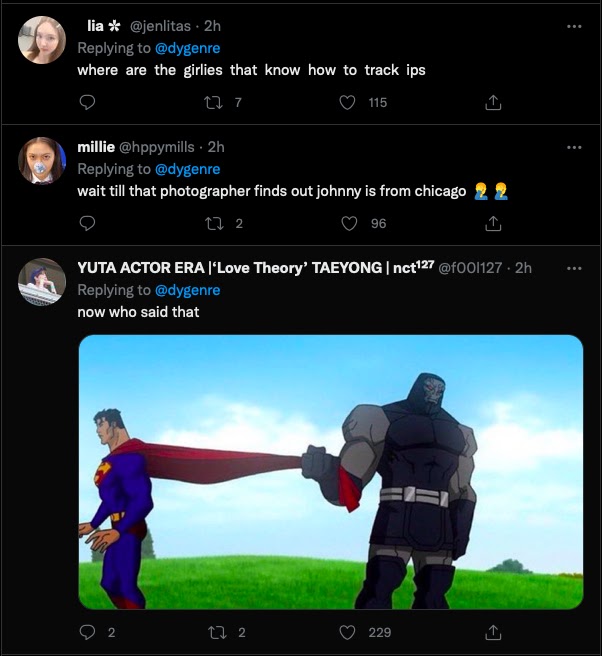 Netizens were shocked to hear such a racist remark made especially considering Johnny is from Chicago, Illinois, and therefore is fluent in English.

Nctzen or not, anyone can see how disrespectful that reporter/paparazzi was to Johnny. Racism and xenophobia is a problem idols face everytime they go to America

Like im gonna need the name of this man to get his job taken from him im being serious, how’s he allowed to work in the industry and have enough confidence to say this straight up ?? pic.twitter.com/0W97pfIl3H

Nevertheless, it was xenophobic to assume that he could not understand English just because Johnny is Asian.

yes, but assuming that bc he’s asian/is a kpop idol he doesn’t understand english IS the xenophobic part, especially in this case bc johnny is literally an american citizen 💀

Netizens are also pointing out that the paparazzi in question also mispronounced Johnny’s name despite Suh being straightforward to pronounce.

*Mispronounces his name * “ he doesn’t understand a word I’m saying” FIRSTLY PUT SOME RESPECT ON HIS NAME…UR TAKING PHOTOS OF HIM SECONDLY ITS THREE LETTERS HOWW?!! THIRDLY HE IS AMERICAN DO A LITTLE RESEARCH OF U WANT A PHOTO SO BADLY

Naturally, the video went viral on both Twitter and TikTok just a couple of hours after the original posting. The original video has over 300K views on Twitter.

NCTzen MARKSTAGRAM (@lomlmkl on TikTok) shared it on TikTok, and it garnered 16.8K views in just two hours.

The original poster of the video was able to identify the paparazzi as Erwyn Diaz. The man requested Johnny’s Instagram handle in order to tag him, which many found quite ironic.

It is disheartening that anyone has to hear such ignorant and racist remarks. Unfortunately, since COVID-19 especially, there has been a rise in anti-Asian rhetoric and hate crimes in America. Many Asian American idols have been troubled about it as they have family there or even live there themselves, such as Eric Nam and GOT7‘s Mark Tuan. Not only that, but the lack of acceptance for Asians in the Western entertainment industry is a primary reason why Eric decided to travel to South Korea to begin a career in music.

Thankfully, Johnny also met lots of fans the night of The 2022 Met Gala. So, hopefully, their love drowns out any hate and bigotry he may have overheard.

NOT JOHNNY LAUGHING AT ME SCREAMING HIS NAME BYEEEEEE pic.twitter.com/7JmVqGjhVh

Still, this is not an exclusive incident in which Johnny was addressed with such offensive assumptions. Three years ago, an interviewer told Johnny that his “English was phenomenal.” Though, the interviewer in question has since apologized.

the interviewer said johnny’s english was “phenomenal” as if he isn’t a wholeass american johnny even said “i’m from chicago” right after that pic.twitter.com/blBGKHn5xK

Similarly, a video went viral of a man being racist towards BLACKPINK‘s Rosé also in New York City. Read more below: