DJs who worked one of the recent BTS PERMISSION TO DANCE ON STAGE after-parties for Las Vegas, Nevada, are being criticized.

HYBE included after-parties in the lineup of activities ARMYs could attend in Las Vegas aside from BTS’s four concerts. Essentially, the after-party is like clubbing but with BTS discography rather than miscellaneous mainstream hits for ARMYs to continue having fun even after leaving the concert. The HYBE-hosted event is titled PERMISSION TO DANCE THE CITY – LAS VEGAS PARTY IN THE CITY and is held April 8, 9, 15, and 16, the same days of BTS’s concerts, from 10:30 PM until 4:00 AM at JEWEL Nightclub.

Yet, ARMYs who attended the second-day after-party reported that the DJ seemed unfamiliar with BTS. One ARMY recounted that Japanese versions of BTS’s songs were played rather than the original Korean versions, or they replayed just a couple of basic hits or even non-BTS pop songs. 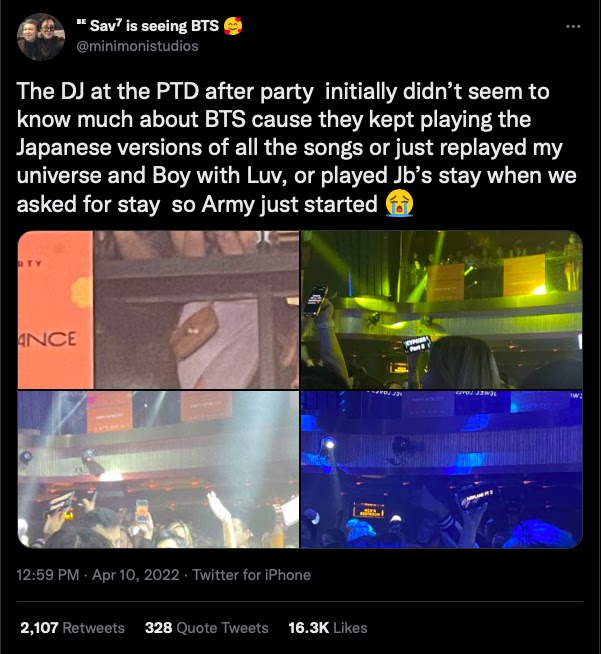 Many ARMYs gave the DJ the benefit of the doubt, so they attempted to be helpful instead of judge. So, many began to raise their phones to show song titles, including “Airplane Pt.2,” “So What,” “Danger,” Blood Sweat & Tears,” etc. Another ARMY event went up to assist the DJ.

Don’t get me wrong it’s a club it was still fun it’s just the beginning was a bit rocky . At some point an army went up and joined the DJ

Despite the “rocky start,” many ARMYs who attended still had fun and shared clips on social media!

Yet, many felt that the DJ that night was unprofessional.

I’m a DJ and there is no excuse for that DJ not being prepared.
I so wish I was working that gig!

Besides, the second night was such a contrast from the previous. The first night’s DJ was knowledgeable of BTS and even included non-mainstream favorites like Jin‘s “Super Tuna.”

we also got super chamchiiiiii 🥰🥹 at a night club. who wouldve thought !!!! https://t.co/d8So7us8wr

ARMYs who attended the first night praised DJ Yo Yolie for the song selections!

Yolie even responded to ARMYs’ comments regarding the situation of the second night to confirm that it was, in fact, not her responsible.

No, that wasn’t me. I even put an announcement on my page 🙋🏻‍♀️

Unfortunately, it has turned out that the DJ in question from the second night was maybe selecting the unusual song choices intentionally.

DJ Angie Vee shared a video on Instagram Stories leaving the PERMISSION TO DANCE THE CITY – LAS VEGAS PARTY IN THE CITY event. The DJ was walking along with what appeared to be a friend who laughed at the recounting of the after-party.

Woo! That was an event… Let me tell you. 90%, 95% BTS songs. I played a total of maybe five non-BTS songs tonight. It was an experience.

Yeah this ain’t it 🤔 pic.twitter.com/Sbfr2PS7yN

After seeing the video, ARMYs called out the DJ’s attitude as it sounded like Angie was complaining about playing BTS songs, although it was clearly advertised as a paid BTS event.

Shocking! In a BTS exclusive event, PAID by #BTSARMY, ya were asked to play BTS songs! Lady, thanks for letting us know who will NEVER step foot in a party paid by us! 🙄💜 https://t.co/dlbSmHRwsW

ah yes, get paid for a bts event and then act surprised that bts fans want to hear bts songs https://t.co/FOkUkP8BSs

Still, apparently, there were not one but two DJs that night. Yet, both were disrespectful of ARMYs’ requests and attempted to play music other than BTS’s discography.

So, ARMYs are attempting to contact JEWEL Nightclub, the event venue, about the negative experience. Many have left reviews, informative comments on social media posts, etc., with the goal of this not being repeated as there are still two more after-parties to be held.

Jewel has both a twitter & IG account & HONESTLY i think ppl need to be leaving reviews & comments about what happened with the D2 event. You should not have to be begging DJs to play BTS when the event is being hosted by HYBE & ppl paid $ 50-75-100 for tickets?? @jewellasvegas

Also be respectful but truthful about your experience if you went and same if you are leaving comments about concerns over upcoming shows next weekend. Being rube is not gonna get across. This isn’t a man hunt but ppl deserve to get what they paid for🤷🏼‍♀️

Consequently, ARMYs have been leaving not only bad reviews but are also requesting refunds due to the bad experience at JEWEL. Even as many stood in protest, the DJs had refused to acknowledge ARMYs’ requests during the after-party.

@MGMResortsIntl @AriaLV Attendees are standing still and protesting. Peeps, you can call your credit card company and file chargeback if Jewel isn’t refunding for your tickets. This is unacceptable. https://t.co/Nl1pfF8Rqk

Other ARMYs suggest that the fandom just take their business elsewhere as there are other after-party events available, official or not.

If any ARMY don’t get to buy the PTD After Party ticket I’d recommend this one. It’s on 14th April tho. Not 15th / 16th so it won’t clash with the official after party event. pic.twitter.com/BQJCjWET63

A previous version of this article had not identified D1’s DJ as Yo Yolie.