The drama had been premiering simultaneously on Netflix every Monday and Tuesday. The story followed Shin Ha Ri (Kim Sejeong, also known as Kim Se Jeong), who pretended to be her friend, Jin Young Seo (Seol In Ah), on a blind date. However, that blind date happened to be with her company’s CEO, Kang Tae Moo (Ahn Hyo Seop)! The real drama started when Tae Moo unexpectedly set his eyes on marrying Ha Ri, still thinking she was her friend. 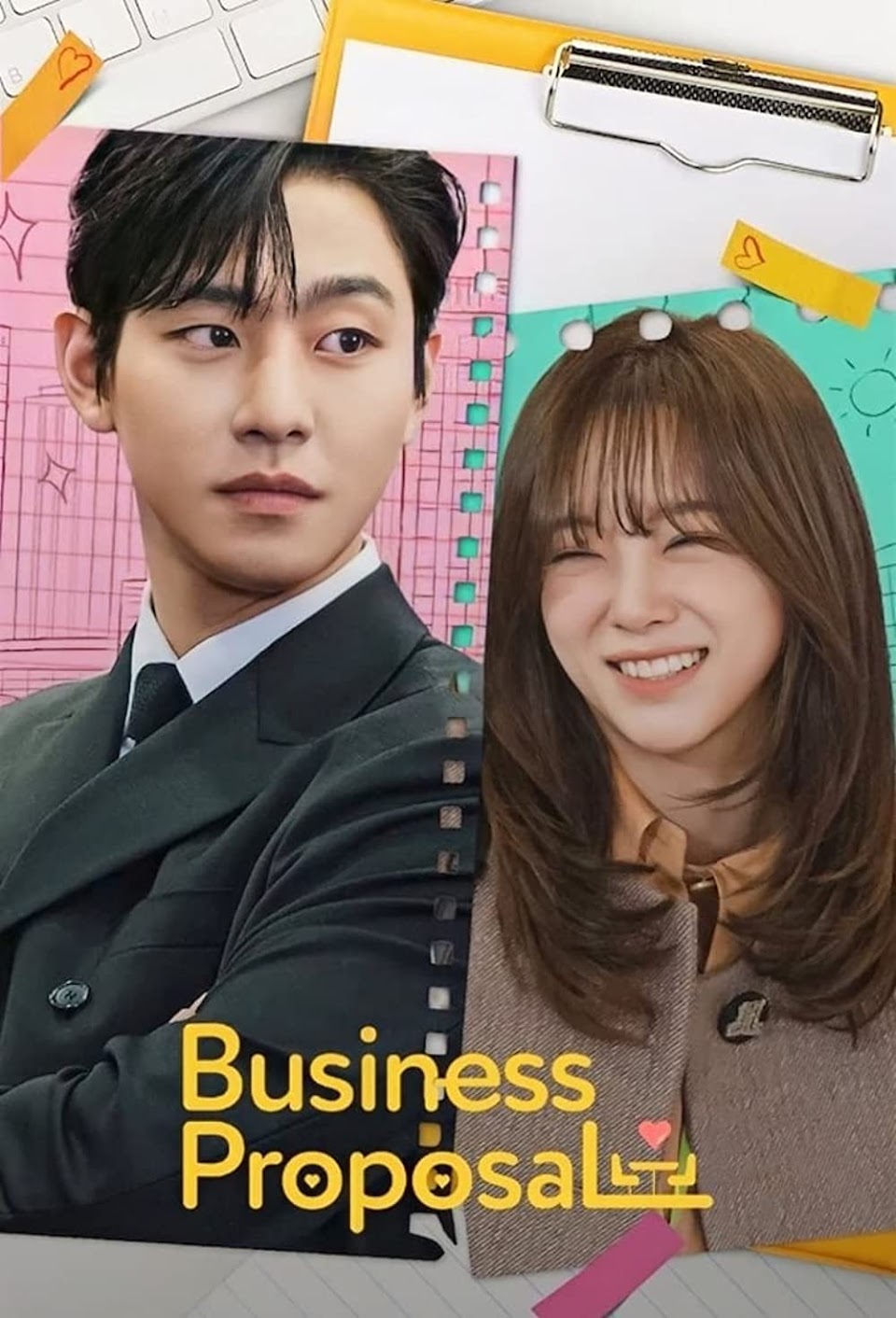 What some may not have initially realized is that the drama is actually based on a manhwa/webtoon of the same name by HaeHwa.

Some of the K-Drama’s posters even pay homage to it!

When this one looks alot closer to the manhwa cover instead of the official poster#BusinessProposal pic.twitter.com/gJOLfZj9Oi

Since Business Proposal is originally a webtoon, the drama contains many comedic and “cartoony” moments.

Always love the “webtoon” touch on this drama. This whole scene is so comical & hilarious from their expressions down to the added effects pls🤣 #BusinessProposalEp10 #BusinessProposal pic.twitter.com/z1OtTDCTX6 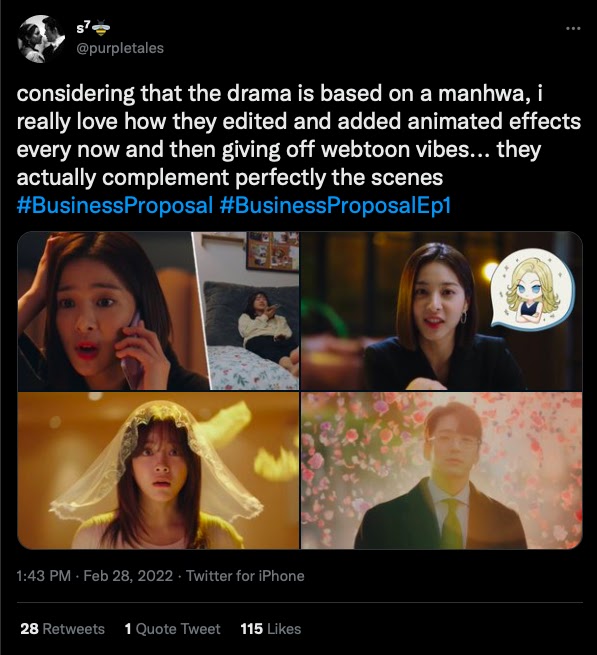 The K-Drama contains many references to the source material. The first episode even begins with Kang Tae Moo in comic form!

Eagle-eyed viewers may have also noticed that an advertising poster of A Business Proposal webtoon is at the bus stop.

The original authors of A Business Proposal themselves have actually been happy with the adaptation. They ever made “fanart” of the K-Drama! 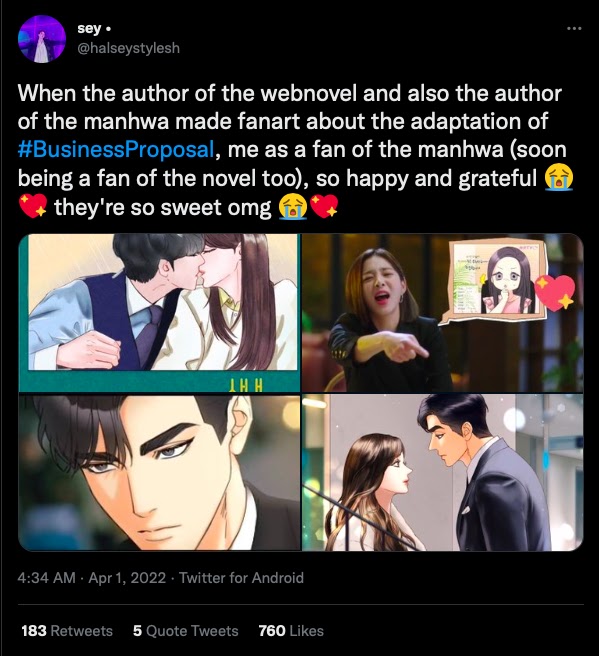 There were certainly changes made so that the K-Drama would be new. For example, Shin Ha Ri doesn’t use a pink wig in the K-Drama though it was an iconic element of the webtoon. Yet, it is still one of the best adaptations, and the creators clearly put a lot of thought and care into it, as is evident with the casting. Literally, some of the actors look like the characters came to life!

The manhwa is one of my favourite 😍
And they really choose great actors (especially the 4 main actors) + their visuals 🥵#BusinessProposal pic.twitter.com/HSeJcbHWgB

The makers of the K-Drama clearly wanted to respect the source material. So, although some scenes and storylines were altered or left out, there are still many shots and scenes straight out of the webtoon! Here are our top 10+ picks…

no, i won’t stop obsessing over the amount of accuracy in this scene 😭 #BusinessProposalEp7 pic.twitter.com/9YC3UDdIDt

The circumstances were different for these scenes, but some of the shots look nearly identical! These characters especially couldn’t have been better cast.

We really couldn’t have asked for a better actress. Kim Sejeong is perfection; she really brought the character to life!

Why do they look alike.?
This is a FL character from one of the manhwa I’m enjoy reading. And they really gives similar vibe. The hairstyle, hair length all are same 👀👀👀#BusinessProposal #KimSejeong #4WaysToSaveYourWife pic.twitter.com/4Q1dLmCMCw

This is one of our favorite scenes in both the webtoon and the drama! It’s just too cute.

Taemu helping in Hari’s restaurant in one of the really cute part in the webtoon. I am so glad that they included it in drama too😍#BusinessProposalEp10 #KimSejeong #BusinessProposal #AhnHyoSeop pic.twitter.com/8v5AM59JgX

It might have been a little less explicit than the webtoon (if you don’t know, it be wildin’ sometimes), but this was all super sexy by K-Drama standards! 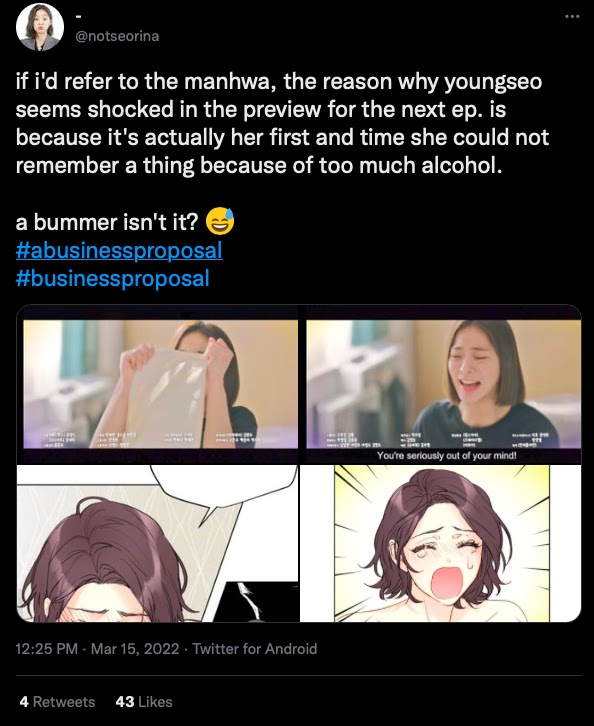 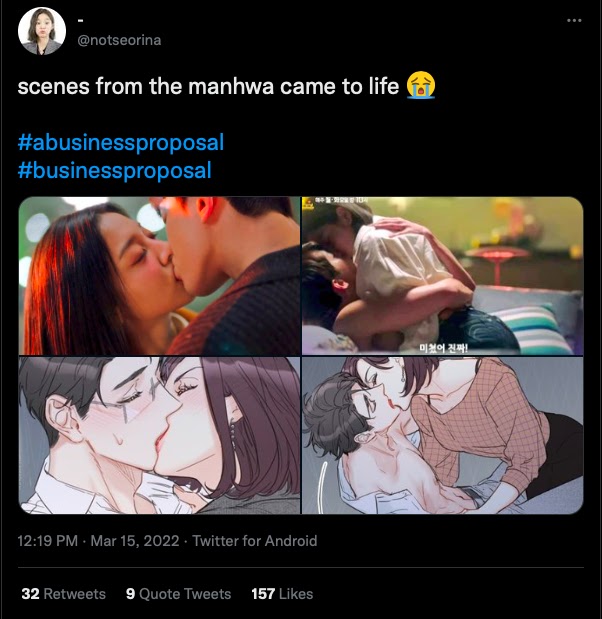 Again, the shots are so similar, but the circumstances were a little different. In the webtoon, the couple was on their honeymoon. In the K-Drama, we’re robbed of even a wedding! 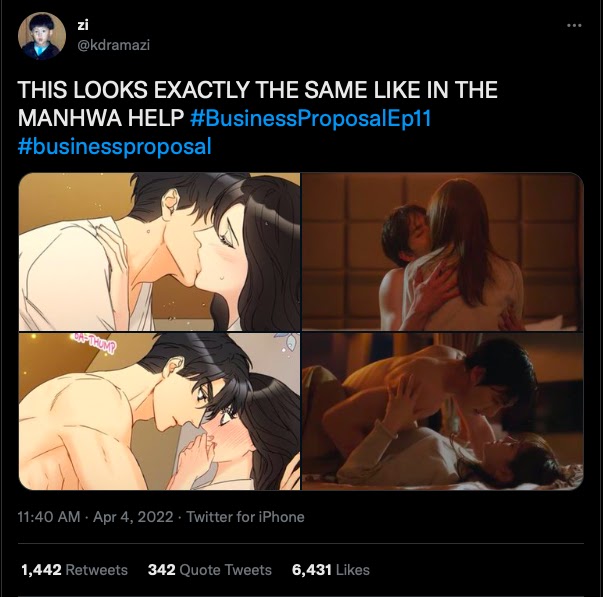 8. This wholesome kiss on the cheek

This is so cute, and Ahn Hyo Seop is really great at capturing Tae Moo!

This is one of the best dynamics ever.

She confessed it the same way in both versions. The main difference is there was no drunk kiss in the adaptation! 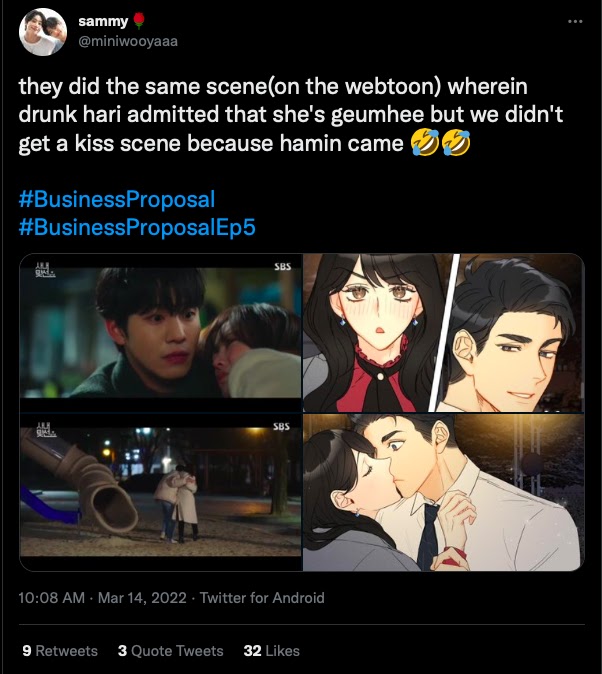 11. The grandfather’s love for fishing!

Last but not least, everyone’s favorite grandfather has a love for fishing in both versions of the story. 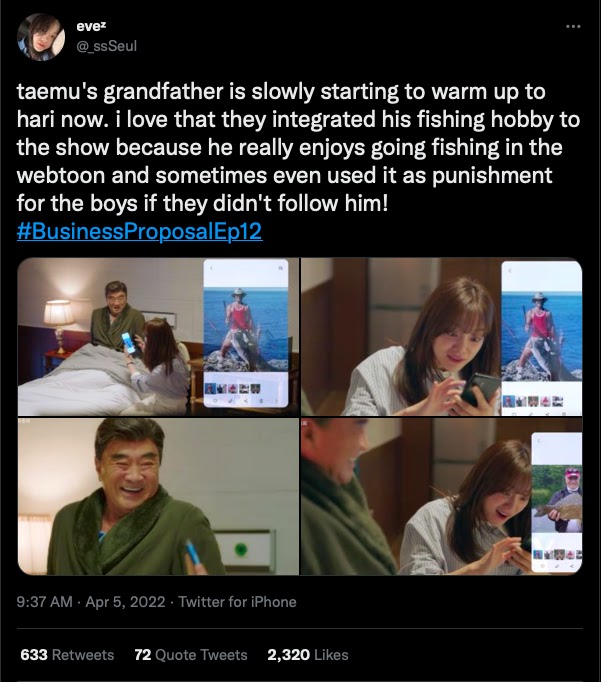