Currently, sensitivities and tensions are running at an all-time high between South Korea and China. They had a long feud history, including over the hanbok and kimchi. While South Korea claims both as their own, China has argued that Korea stole both from them.

Things hit a peak during the 2022 Beijing Winter Olympics, starting with the short-track speed skating event. As the 2022 Olympics was hosted in China, many claimed the judges favored the home team.

During the mixed team’s relay, the Korean team had initially entered the pre-semifinals but were dropped from the semifinals. Although they had been selected to move up during the pre-semifinals, after a video replay, they were disqualified. The Chinese team, who was next in line, was chosen to advance to the semifinals instead. The Chinese team had finished third during the semifinals and failed to make it into the finals. However, the United States team, who had originally finished second, became disqualified and China was pushed up to compete in the finals.

Korean netizens were also very upset when a match involving a Korean and Chinese speed skater seemingly showed the Chinese skater pushing the Korean skater Hwang Dae Heon on the knee to slow him down. This was during the 1000m semifinals.

Korean nationals were also duly upset when they realized that the Korean team’s Park Jang Hyuk was injured during the match. According to news outlet Joongang Daily, an Italian speed-skater had crashed into him in an attempt to overtake his components. Park Jang Hyuk fell from the collision, and a Chinese speed-skater who was following from behind accidentally skated over his hand. While no one blamed the skaters for the accident, Koreans were heartbroken at the pain Park Jang Hyuk suffered. He was sent to the hospital and could not play in subsequent rounds.

While Korean celebrities supported the Korean teams, including BTS‘s RM and THE BOYZ‘s Younghoon, aespa‘s NingNing fell into hot soup with the Korean public.

NingNing had innocently congratulated the Chinese athletes in Chinese.

Wow, I heard that we got the first gold tonight… I’m happy. I just heard from my homeroom teacher that two of the Olympic medalists are our alumni. Such an honor. I respect all athletes so much.

NingNing then proceeded to continue to praise the other athletes globally, regardless of nationality.

(Our) Athletes are all so amazing.

Her initial message, “athletes are all so amazing,” could be translated as both “our athletes” as well as “dear athletes.” Given that the Korean word “woori” can mean a sign of affection and “our,” fans had been debating which one she meant.

Perhaps she soon realized the consequences of her initial messages, for she followed up by saying that everyone on earth was a family and praised all athletes.

As I was watching, I thought that athletes from all countries are very amazing and have worked so hard. Hwaiting! I just cleaned my room, and it was so hard. Everyone on earth is a family. I…have been buying so many clothes recently. I like them all so much and want to show them to you.

However, it was not enough to quell the anger that many Koreans felt at her initial statement. Koreans felt that as a member of a Korean girl group promoting mainly in South Korea, she should have been more careful with her words on a public platform. On the other hand, the international audience felt that she was simply congratulating her own country.

Things crossed a line when an angered netizen hacked her private Instagram and published her following list online. The list contained many male and female idols, various fashion brands and of course, her personal friends. 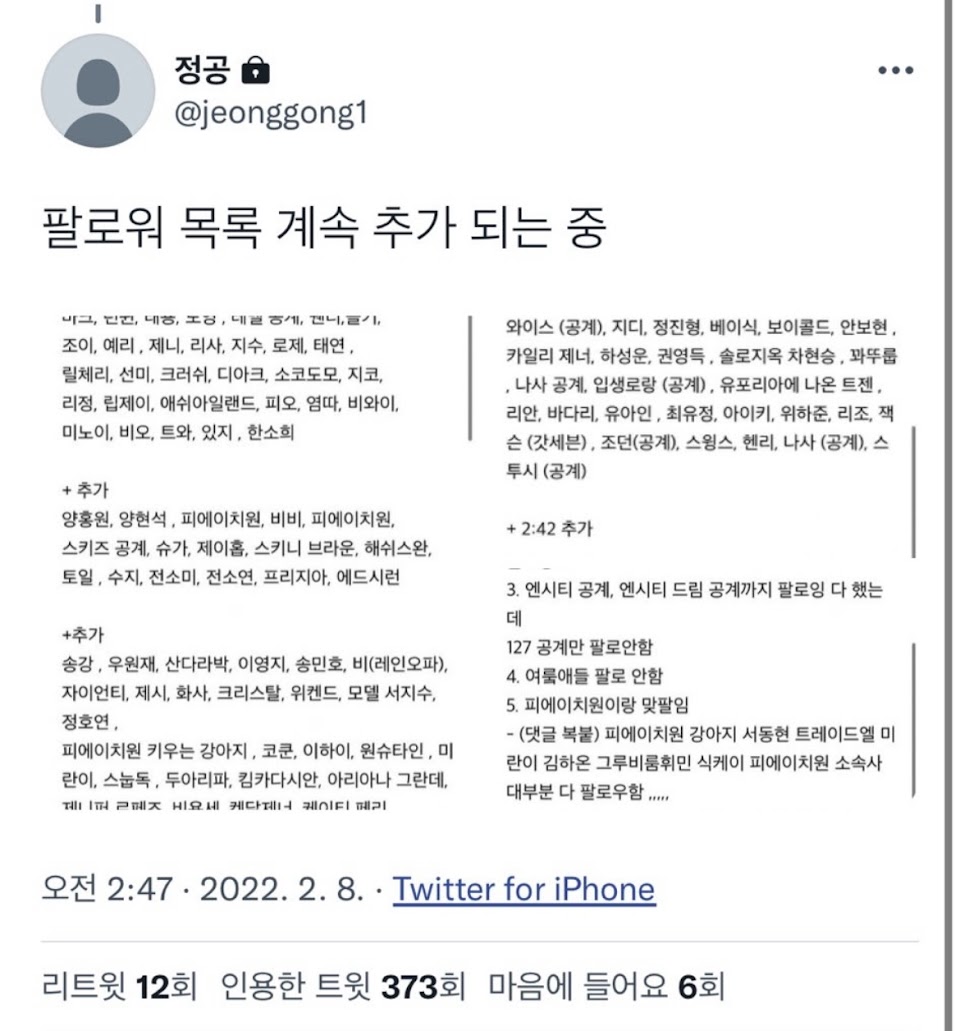 They also noted that she followed NCT‘s official account and NCT Dream, but not NCT 127. Furthermore, ph-1 follows her as well. They were certain it was her when the account was caught watching one of her publicly known friend’s Instagram Live.

The friend had previously been revealed to fans when they uploaded photos taken with NingNing during aespa’s trip to New York.

The account was also followed by aespa’s stylists and NingNing’s other publicly revealed friends.

While the Korean public may be angered at NingNing, they were still baffled by the ridiculousness of the hacker. Many rallied in support for her and dismissed her account as nothing but that of a teen girl’s.

DF they doing LOL Sigh… I’m so sick of these accounts latching on to someone and chewing them.

Other comments included “so what” and “NingNing is so cute lol” as well as “yeah, we’re mad but what does that have to do with her private account.”

The initial netizen that revealed her private Instagram, @jeonggong1, has since went private and deleted their post.