The debut line up is comprised of seven members and it was announced that their group name would officially be T.A.N to stand for “To All Nations.”

The seven final debut members are as follows:

As we previously mentioned, T.A.N stands for “To All Nations” and is supposed to represent the group’s wishes to bring their music beyond just South Korea. They’re set to debut in 2022.

Netizens were quick to notice a couple things though.

” Can I copy your homework “
“Sure just don’t make it obvious” pic.twitter.com/t6JHFb9XH3

Some felt bad for the members of T.A.N because the name wasn’t their choice, but the network’s.

I actually feel a bit pity to the member of that group. People who don’t know about their survival program will think that it’s a cover group, now I wonder what will their fandom named be? 😅

Lol they just don’t get it. No matter what companies/groups/whoever else do, they simply CANNOT replicate the success of 방탄소년단! It all comes down to talent, passion, hardwork, teamwork, management etc. They’re forgetting other variables in success🤷🏽‍♀️ Companies should just… pic.twitter.com/a1v3ljFura

These survival shows realize they will never have 2nd BTS like even if they had same name & everything,there’s only 1 BTS that’s it

Naming group TAN & the fact owner of survival show is mbc,the one that have beef with BTS,cause BTS decided to go to NYE over going to mbc NY show

One netizen explained the meaning of the logo.

the logo represents their tower, that tower has been with them since episode 1, that tower plays a big part on the show. TAN means to To All Nations. MBC opened group name suggestion and choose their name from there. it has a good meaning too. this is the cruelest survival show

While it was never confirmed that BTS and MBC have bad blood, lots of ARMYs came to the conclusion after BTS skipped the MBC end of year music festival to perform at Times Square in New York. People seem to think that MBC then took action against other Big Hit artists in retaliation. 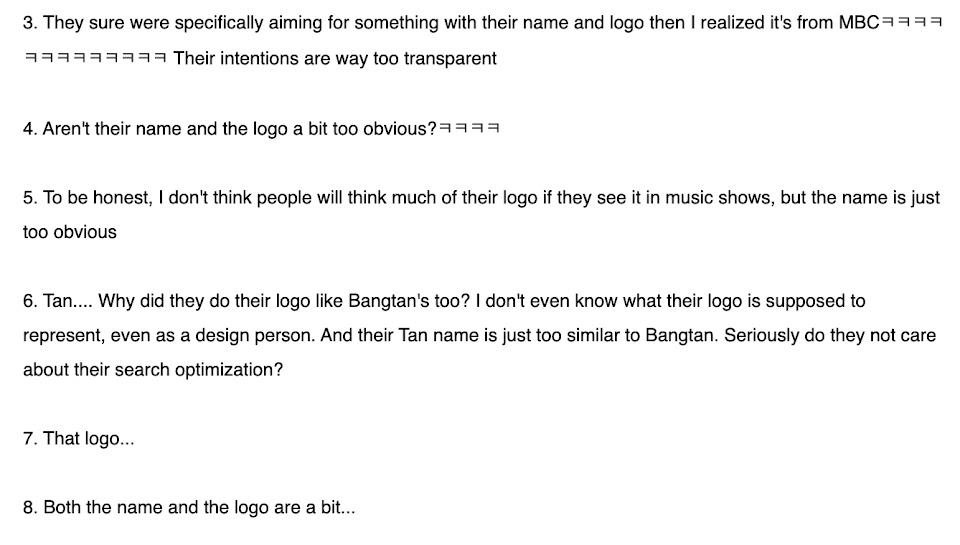 As ARMYs on Twitter had a bit of fun comparing the new group’s similarities to BTS, K-Netizens also noticed the similarities.

Although the name and logo do seem similar to those of BTS, that does not undermine the hard work of the 7 boys who made it to the debut line up. What are your thoughts on the situation?