With BTS in America, ARMYs have been treated to a lot of content and material from the group. Whether it was partying with Lizzo at the Harry Styles‘ concert or meeting fans in restaurants, the group has been making the most of their trip.

One event that took the world by storm was this year’s American Music Awards (AMAs). BTS made history by winning three awards and becoming the first act to win the Artist of the Year award.

However, it seems as if the night was also very special for one lucky ARMY! A user on TikTok (@itskathleenngo) recently gained attention from ARMYs worldwide when she was literally living the dream!

In the first video posted, the user shared how excited she was to go to the AMAs in person and see BTS perform live for the first time in two years…

If that wasn’t enough to make anyone jealous, the next part of the video made fans green with envy. Dressed immaculately in a red dress, she announced that she had been picked as a seat filler next to BTS.

So, what is a seat filler?

According to official definitions online, a seat filler is a person who fills in an empty seat during an event. In particular, when it comes to award shows, they are either picked or volunteered to fill out the venue when the camera pans the audience.

They don’t need any qualifications or requirements and can sometimes be picked on either how someone looks, applying for the chance, or just being in the right place at the right time.

ARMY‼️ Re-watch this performance and all the @BTS_twt moments over and over again because the #AMAs are streaming on @hulu! #BTSxAMAs pic.twitter.com/1UIocVulEI

Usually, it is a great experience to be closer to the action, but this ARMY was living the dream as a seat filler. In her latest videos, she shared some of the y/n (your name) moments she was living, and the event will be a once-in-a-lifetime opportunity.

When the members accepted the award, she was on a bench right next to the stage. As the group went up to get the award, the user respectfully bowed as the members went up, and Jungkook returned the gesture, showcasing both of their politeness.

If that wasn’t enough, she made sure that the members could feel the energy of all ARMYs during the group’s performance. When the members sang “Butter,” the user and her sister were jamming along like their lives depended on it.

Of course, that meant that the members could see them perfectly, and Jimin and Jungkook even danced right in front of them! You couldn’t have gotten closer even if you were front row at their concert.

They even made it onto the television and proudly showed their ARMY pride throughout!

After ARMYs found the video, the user kindly took to the comments to answer any people’s questions about how she got this opportunity. She explained that she was just a college student, and after applying for seats in the pit with her sister, she was asked to become a seat filler.

She then emphasized that they had no control over where they were sat. Staff sometimes told to stand up, move to another place, and other instructions. Unsurprisingly, they weren’t allowed their phones, but she explained that it allowed her to live in the moment more! 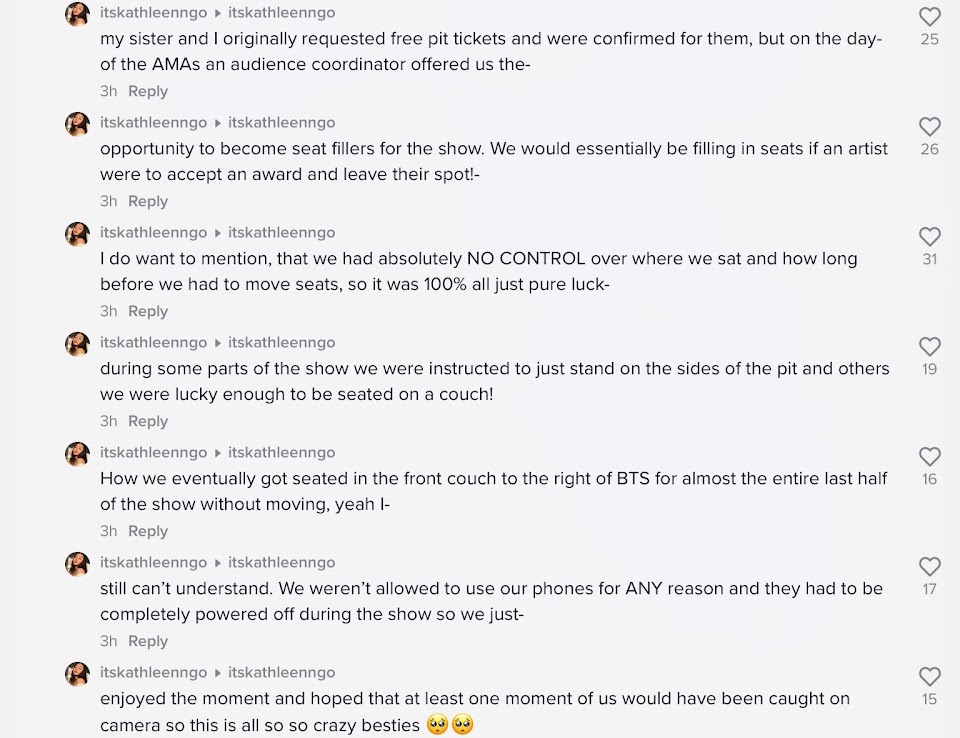 This ARMY lived the dream. Along with other fans who got noticed during their LA trip, BTS has shown how humble and appreciative of their fans they are.

You can read more about ARMYs interactions with BTS below.

Lucky ARMYs Caught The Attention Of BTS During The Harry Styles’ Concert, And Here’s How The Members Reacted