It’s been almost two years since the last time BTS flew internationally. Their 2020 tour Map of the Soul was cancelled due to the COVID-19 pandemic and since then, ARMYs and BTS have only been able to meet each other through online concerts and livestreams.

However, as appointed “Special Presidential Envoys,” the group is scheduled to speak at the United Nations General Assembly this week in New York City. They boarded their flight on September 18, 2021, and made their first airport appearance in a long time! Let’s take a look at how much they’ve grown since their last departure in February 2020!

RM showed up at Incheon Airport in this effortlessly cool, edgy, all-black outfit that contrasted wonderfully with his bleached hair!

His recent outfit is much more casual, though he still looks equally as amazing. His hair is now cut short and dyed darker. Instead of an all-black look, he’s gone with a grey sweatshirt and pants from Louis Vuitton. RM even has an LV bag to match!

Jin looked classy and casual at the same time back in February 2020. His soft hairstyle and sherpa coat were paired with a simple white t-shirt and blue jeans.

He’s still rocking that white tee and blue jeans look, but he’s also got Louis Vuitton all over him! It’s been almost two years and Jin looks just as bright and handsome as he did back then.

Suga was all cozied up for their flight last year, wearing a giant puffer jacket to keep warm. The all-black, sporty but comfy, and absolutely cool look fits him perfectly!

This year, Suga still looks super comfortable but with a preppy twist and pop of color! His bright blue sweater stands out, as does his newsboy cap. He’s also decked out in Louis Vuitton!

J-Hope ended all debates on whether brown is fashionable or not when he showed up at Incheon Airport in this all-brown outfit! The answer is definitely YES! Everything from the sneakers to the bucket hat to the baggy pants is so J-Hope.

This year J-Hope went with a pair of shorts and an LV jacket that matches Jin’s pants! He’s still got on a sick pair of sneakers, and that Louis Vuitton mini-trunk bag is everything! 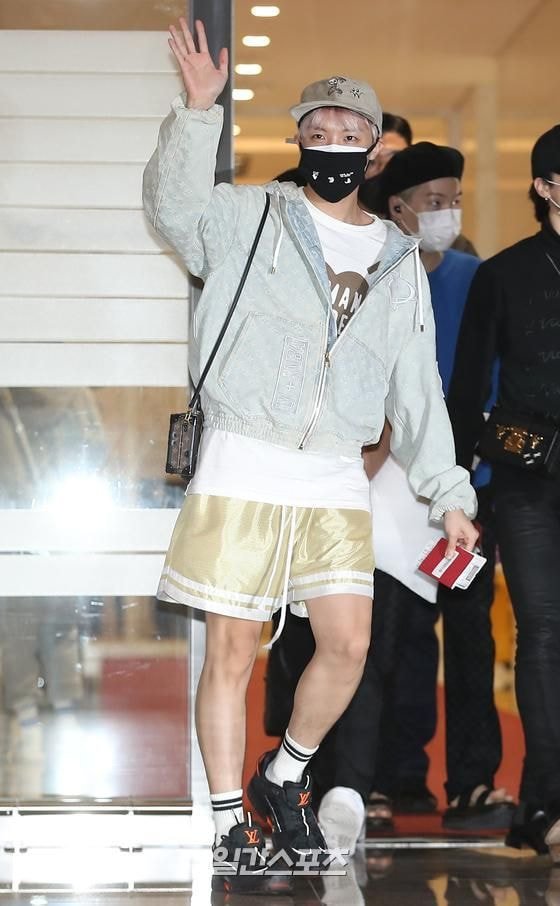 Jimin’s outfit on this day totally broke the internet! From his newsboy cap to his sleek black coat, the round-frame glasses to his dark green sweater, this is an outfit that will go down in Jimin fashion history.

He showed off his slender, enviable figure again but with an edgier twist this time! Jimin wore a black Louis Vuitton turtleneck with a mini-trunk crossbody, a pair of skin-tight black pants, and sleek black boots. Even in all black, he shines!

V truly is the king of the contemporary preppy fashion wave! This outfit from last year proves it. His white dress shirt and tie are so formal, but his slip-on shoes add a casual element to this look.

Fast forward to 2021, and V is still rocking the formal look even at the airport! The biggest difference now is his incredible pairing of different patterns: the blue and black dress shirt with brown pattern trousers make a perfect outfit on V.

BTS’s maknae was at the peak of his edgy streetwear style back in 2020, and this outfit totally proves that! His chunky black sneakers are definitely a signature Jungkook item.

While we could see the beginnings of Jungkook’s tattoo sleeve then, this year we saw it in all its glory! Gone is the all-black outfit — though his look now isn’t less edgy at all. Jungkook’s got on a matching Louis Vuitton short-sleeved set that shows off his incredibly detailed tattoos.

We wish them a safe flight and a great time in New York! Read more about their fancy new envoy passports and their schedule at the General Assembly below.