If you’ve watched K-Dramas Yumi’s Cells or Tomorrow, you have likely seen the product placement (PPL) for café Mauritius Brown.

Product placements and K-Dramas are almost synonymous. From the latest makeup and skincare products and Samsung Galaxy phones and, of course, Subway, it just isn’t a K-Drama without them. 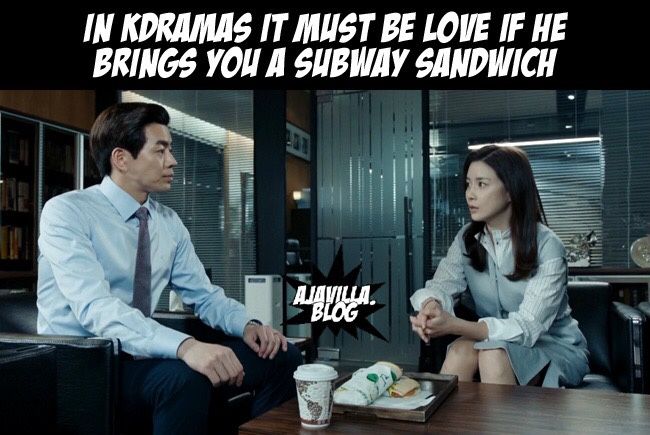 Yet, real-life restaurants and cafés are part of K-Dramas too. Even Shin Ha Ri’s family restaurant in SBS‘s Business Proposal is a real restaurant called Goobne.

Like the rest of us, writer and producer Ray Liu has been watching MBC‘s new K-Drama Tomorrow. And again, he couldn’t help but notice the clear product placement for café Mauritius Brown.

So, he looked it up to realize just how problematic the café really is. Ray Liu is now calling out the café for “blackfishing” and cultural appropriation.

As I’m watching #kdrama TOMORROW, I notice this prod. placemt for #MauritiusBrown, a café in S.Korea. Logo is of a Black woman’s silhouette with an afro. I found it odd; not one Black person appeared in this series. I did some digging… ofc, it’s Blackfishing and CA. [thread] pic.twitter.com/kbrfEBzCUn

“Blackfishing” is a term coined by journalist Wanna Thompson in 2018. It is essentially when a non-black person attempts to present themselves as racially ambiguous, normally black, usually to profit off of it somehow. For example, influencers and non-black rappers are often guilty parties.

Blackfishing is a type of interpersonal racism that depicts Black people as stereotypes and portrays Black culture as a product.

Likewise, cultural appropriation is adopting elements of a culture that is not your own. Thus it results in portraying others offensively and stereotypically. Many K-Pop agencies have received criticism for participating in this.

Ray Liu pointed out that the café Mauritius Brown was first featured in Yumi’s Cells. It has been marketed as a location worthy of photoshoots for Instagram.

Apparently, this café was 1st feat’d in K-drama, YUMI’S CELL. Source: https://t.co/eTSh3Rj0fe. The café claims to be “IG-worthy.” Definitely not weird to have a bunch of non-Black folks posing for selfies w/ their cups of coffee that have a silhouette of a Black woman on it 🥴 2/ pic.twitter.com/EbaawjmPC0

Yet, that is what makes it all the more unsettling. Liu revealed that the café has no authentic ties to black culture despite its imagery.

You’d think, “Oh, a logo with a Black woman on it must mean this café is owned by a Black woman in S.Korea!” Wrong! S.Korea’s thirst for white validation is more rampant than ever, that they’d copied white supremacists’ centuries of homework, word for word. 🤨 #MauritiusBrown 3/ pic.twitter.com/Uz33EIcHYn

Mauritius Brown is named after the small island nation Mauritius in East Africa, obviously. It just has added “Brown” at the end.

Yet, no founders or owners of Mauritius Brown are either Mauritian or black. Instead, they are all South Korean. Still, they are making a profit off of others’ culture.

That’s right. #MauritiusBrown is owned & operated by & only staffed w/ S.Koreans, w/ zero Black people involved in any of it. This is the CEO, Pak Jong-won, who literally made a business on the imagery of Black women. Source: their stupid website. Feel free to translate. 4/ pic.twitter.com/SIBhsfZQmU

CEO Park Jong Won explains the meaning behind the café’s name on the website, revealing that its brown sugar used for milk tea originates in Mauritius. Yet, he emphasizes that it is a “pure Korean brand that does not pay overseas royalties.”

Hello? I am Park Jong Won, CEO of Seojin Co., Ltd. First off, I would like to thank you for visiting our ‘Mauritius Brown’ website.

Our Seojin premium milk tea brand Mauritius Brown, which uses brown sugar made from Mauritius, is the meaning behind the name of our company, and is a pure Korean brand that does not pay overseas royalties.

With the belief of providing premium milk tea that consumers have never experienced before, we have satisfied the diverse needs of consumers with healthy and luxurious taste, trendy ingredients, menus that cannot be replaced, and a hot place for Instagram photos.

Before the brown sugar milk tea craze, which received much popularity, we detected the global trend of brown sugar milk tea in advance and succeeded in launching a domestic brand. But our brand has suffered several crises due to our weak response to the rapidly fazing craze and complacent strategy during the time COVID-19 was in full-swing.

But we are going to get back up again and take a strong step forward. Now, even if it is a bit slow, we will take each step honestly and create a franchise brand success story in which the formula ‘Mauritian Brown= Safe Income’ is established.

Going forward, we will do our best to break away from the simple brown sugar milk tea brand and become a brand that spreads a healthy and happy taste. We ask for your continued interest and love. Thank you.

The logo is clearly an African woman in a silhouette with a traditionally worn natural afro hairstyle. There is also a VIP membership referred to as “Mauritius Crown.”

I couldn’t translate all of this, but this seems to be a VIP membership at #MauritiusBrown, called Mauritius “Crown.” Not only did they appropriate the afro imagery, they also stole the iconography of a traditional African-women hairstyle. I’m livid. 5/ pic.twitter.com/U1tdMbsWTC

It is also ironic that a place named for Mauritius uses such obvious imagery of black women since Mauritius is actually known to be very multi-racial, with a majority being South Asian (especially Indian), Chinese, European, etc. So, it’s actually not a majority-black African nation.

So, netizens are calling out Mautirus Brown and attempting to educate on institutional racism.

I’m only opening this thread to call out this Korean café franchise for their stupidity, ignorance, and contributions to institutional racism. Malcolm X was right; except, now, it’s “Black women are the most disrespected people in [the world].” #MauritiusBrown pic.twitter.com/haHSf8cwAM

Another netizen pointed out that not only is Mauritius Brown profiting off of cultural appropriation, but the logo may be plagiarized. It bears a resemblance to the one seen on old TCB hair care products.

I looked it up too because as someone born in the 70s it reminded me of the old TCB hair products logo..and I was right.. pic.twitter.com/1nqBNklrJP

Initially, some black K-Drama fans were excited by the inclusion of the café, seeing some minor form of representation. Unfortunately, it is just another case of cultural appropriation.

Thanks for sharing your perspective! Can’t even begin to imagine how that must’ve felt. It really sucks.

Yes! At first, I thought it was either a small business in America or even Africa that made it to Korea. And THIS is why we call out CA; never mind the shenanigans K-Pop idols do—this cafe is making money off of Black aesthetics and zero $ is going to anyone Black.

Yup. Ray and I were talking about it in the DMs, and I said I knew in my gut no Black woman was involved. There’s not a single Black or brown-skinned person in the drama, or seen to be working in the Cafe, us the colours of those hair bands are too on the nose.😒

Others are pointing out how troubling it is that a South Korean café markets off on black women’s aesthetics and likeness. Not only is the café not tied to one at all, but black people are often disrespected and discriminated against in Korea.

Just as we suspected. Not a single Black woman or person was involved with creating the Cafe or brand. U abhor how Black people, or culture, aesthetics and bodies are seem as commodities by South Koreans (and other non-Black people), for them to gain clout with eachother.

Black content creators who travel to South Korea share their experiences. Krys Tha Sis (@beyonceibnidas) is a black TikToker who shares highlights and experiences from traveling in South Korea. While most content is humorous, she sheds light on microaggressions and racism she experiences as a black woman in Korea. She recently recounted being turned away at a club because she was non-Korean despite their playing foreign music and even revealed she was touched when forced to leave.

Likewise, biracial entertainers in Korea, such as Nigerian Korean model and actor Han Hyun Min has spoken about the racism he has experienced. 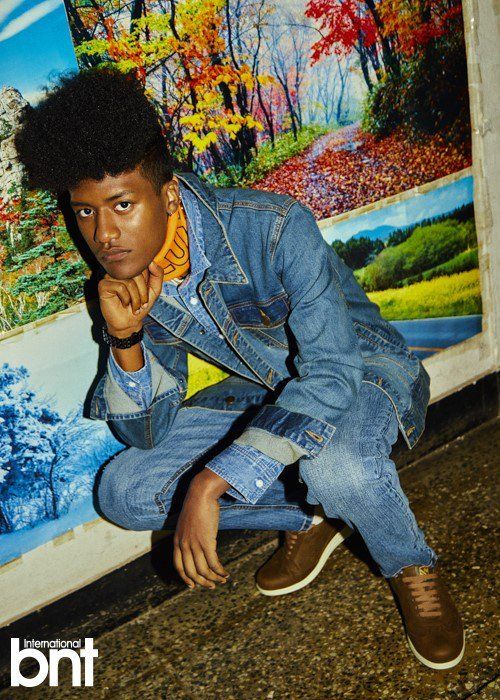 Black fans of Korean content, such as K-Dramas, are disappointed but not surprised by the recent inclusion of Mauritius Brown due to its problematic nature. Yet, recently, many dramas have been criticized for their portrayal of foreigners or straight-up cultural appropriation. 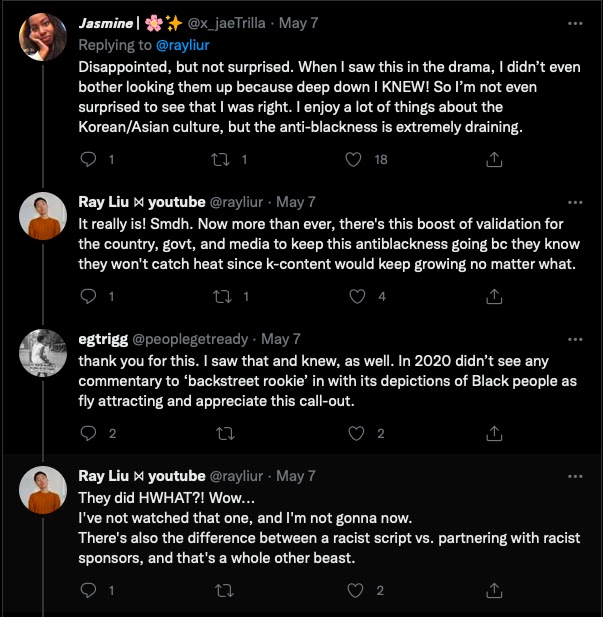 SBS’s Penthouse received criticism for cultural appropriation and racism during season 3 after introducing a new character.

Most recently, tvN‘s new K-Drama Sh**ting Stars received serious backlash just after its premiere due to its portrayal of Africa. Read more below: