TvN’s new K-Drama Sh**ting Stars just premiered over the weekend. Yet, it is already facing major criticism from viewers.

Sh**ting Stars (also known as Shooting Stars) has been one of the most anticipated K-Dramas for April. Everyone was excited to see the all-star cast, including model, actress, and singer Lee Sung Kyung and actor Kim Young Dae as PR team leader Oh Han Byeol and A-list actor Gong Tae Sung, respectively.

As one of the nation’s most beloved stars, Gong Tae Sung (Kim Young Dae) is used to living his life in the spotlight. With the eyes of the world constantly on him, Tae Sung does his best to keep a smile on his face and his temper in check. Seen by the people as a kind and polite young man, the only people who don’t buy into his whole good guy personna are those working for his management company.

As the head of that company’s PR team, Oh Han Byeol (Lee Sung Kyung) knows exactly what Tae Sung is really like. Well aware of his strong desire to win and his hot temper, Han Byeol has had to employ her excellent speech and crisis management skills on a number of occasions, in order to keep Tae Sung’s reputation as spotless as it seems. Constantly bickering, there isn’t anyone in the world better suited to the role of natural enemies than Han Byeol and Tae Sung.

Forever at odds with each other, Tae Sung and Han Byeol seem destined to hate each other forever. But could the time they’re forced to spend together change those feelings or will their mutual loathing last for all eternity?

The combination of star power and the intriguing plotline captured K-Drama fans’ attention long before its release, and the hilarious promos certainly added to the anticipation.

Finally, it premiered its first episode on Friday, April 22, and the second on Saturday, April 23. Yet, it disappointed many in just the first few minutes…

The K-Drama begins with introductions of its two main characters. Oh Han Byeol (Lee Sung Kyung) introduced herself as the “Public Relations Team Leader at Starforce Entertainment.” She describes her role and responsibilities, such as press releases, communication between management and artists, and defending represented artists.

During an interview, Oh Han Byeol is interrupted by her phone ringing. So, she answers it to be asked about one of her company’s actors, Gong Tae Sung. She explains that he is currently abroad, doing volunteer work in Africa.

I’m not sure what he’s up to. He’s volunteering in Africa so he’s probably working hard digging a well.

While it may have been meant to portray the character in a positive light, viewers found the following scene offensive.

It seems like writers and PDs of #ShootingStars really forgot that 30 to 50 years ago Korea wasn’t thriving. GTS just needed a good History book about his own country to know that clean water, food, and clothing weren’t guaranteed even in his own land. #ShootingStarsEp2

It cuts from South Korea to Africa with stereotypical imagery and “traditional” music that some say is to imitate Disney‘s The Lion King.

If that was not bad enough, the entire scene continued to perpetuate stereotypes. Gong Tae Sung is in Africa (it’s never specified, generically dismissing the continent as a monolith) to drill for water.

Netizens called out the K-Drama for depicting Africa as a country rather than a whole continent and portraying its male lead with a “white savior” complex coming to help bring water as if Africa doesn’t have water access already.

The depiction of Africa was sooo offensive.
Africa is a CONTINENT and not a country.
And the Lion King’s song ?? THAT’S A BIG NO.
And the « white saviour » who comes to bring water. STOP DOING IT !! there‘s water in Africa.
That was shocking !#ShootingStars#ShootingStarsEp1 pic.twitter.com/ASbRxq3SQC

that africa was so unnecessary.. i’m tired of africa being treated as a monolith place with lion king playing and the no water access..#ShootingStarsEp1#ShootingStars

Viewers also noted that the editors included a “yellow filter.” This technique is often used in Hollywood films when portraying foreign places, including Mexico, India, and Africa, as “less fortunate,” “dangerous,” and “underdeveloped.” 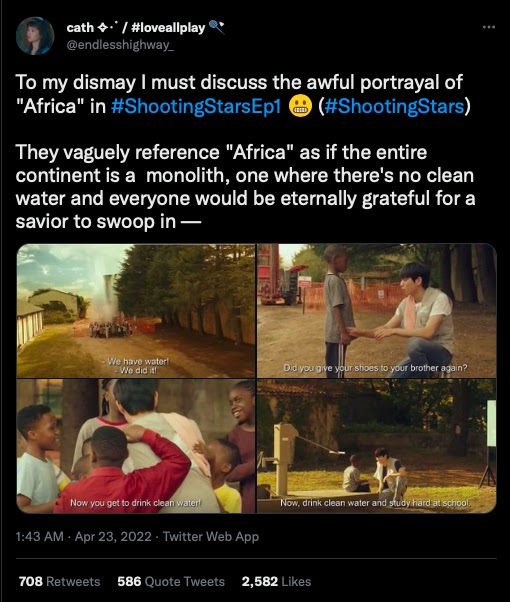 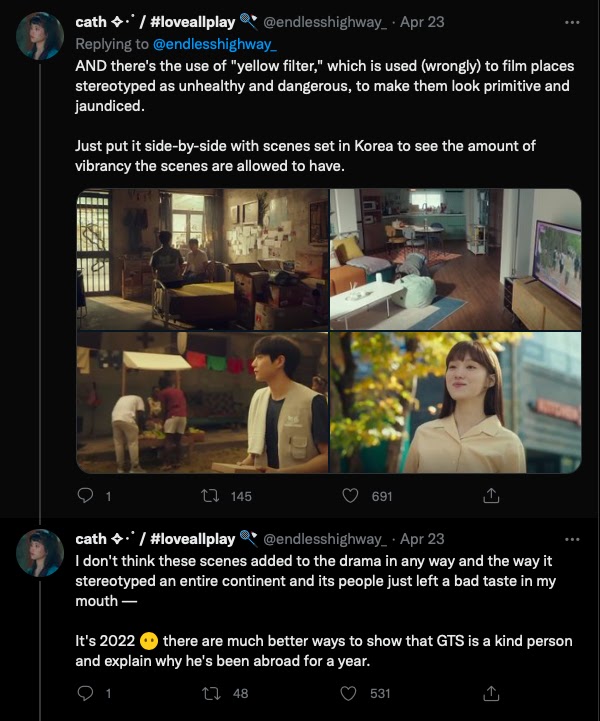 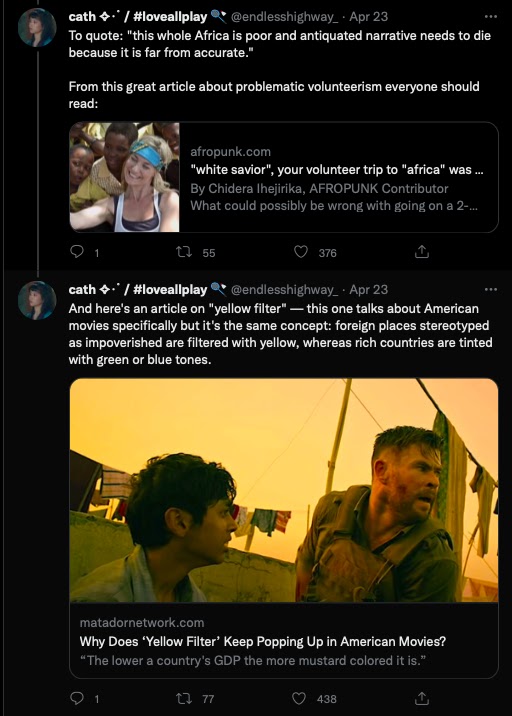 Additionally, another viewer noted that while it was portrayed that Africa was “underdeveloped” and in need of assistance for water access, Tae Sung was able to video chat free of issues. So, it contradicted itself too.

It’s the way he shouldn’t have wifi or 4G for me. I mean you sent a whole Korean digging the 2nd well of Africa, a WHOLE CONTINENT of 54 countries, but he can make video calls using the internet? IKYFL. #ShootingStars #ShootingStarsEp2 @tvNDramaKorea https://t.co/0rOFILvo6N

Consequently, while K-Drama fans were initially excited and found it to have many potentials, this scene left a bad taste. And many are finding it difficult to move past and enjoy the rest of the drama. 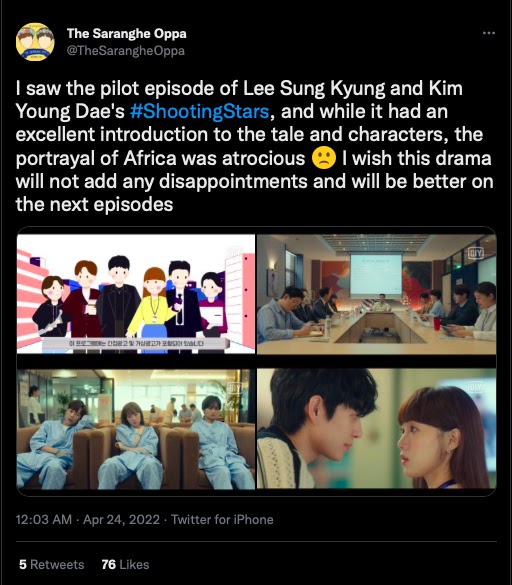 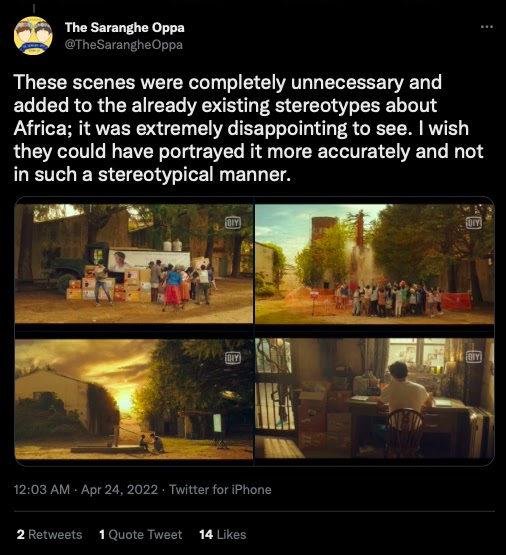 African K-Drama fans are especially disappointed. They are calling out the K-Drama for its hurtful stereotypical portrayal of Africa.

I was super exited to watch #shootingstars but when I saw the scenes in Africa I was like what the f*ck. These peoples need to make some recherche. We have water in Africa & Africa it’s not a Country but a beautiful continent. We are also developped. #KimYoungDae #kdrama pic.twitter.com/Hcx05cVSwS

K-Drama fans feel that tvN took a step in the wrong direction, and it’s especially backward to portray Africa in such a way in 2022. Still, it is not only Sh**ting Stars that has this issue. Many dramas portray any foreign country stereotypically.

#kdramas always tend to make a caricature out of foreigners. #Vincenzo annoyed the hell out of me with its stereotypes of Italy and Italians, #TheKing2Hearts with the psycho Russian girl, or the jokes about Black characters in #SoNotWorthIt.

I don’t care about #SongJoongKi being hot if his Italian is rubbish (dub him ffs)+ the plot around his ‘italianity’ is all stereotypes. For #TheKing2Hearts find a Russian actress who can actually act the part if you’re giving her A LOT of screentime throughout the show.

I love #kdramas but all this show how much South Korea has a long way to go when it comes to how it sees/perceives the world.

Unfortunately, the depiction of Africa is not the only thing Sh**ting Stars is under fire for. A few viewers are also pointing out a disregarded but disturbing scene.

In Episode 2, the female lead is nearly a victim of sexual assault as the male lead attempts to remove his pants to prove he is “sterile,” following false reports that he is a eunuch due to an unfortunate typo. Her co-workers come to her rescue just in time, though.

Still, the moment is upsetting and triggering. The worst part is that it appeared to be played for laughs.

While there are far fewer criticisms online regarding this scene than the Africa-based scenes, it does not make it any less alarming.

this is not about the actresses and actors but it’s about how the drama was not well written. they are good actors with good talents but the drama is clearly going over board

bro… this scene alone is enough to turn me off… thats sexual harassment yall ??? sorry i know its only the earlier episodes but imma give this a miss… 🙃 have fun to the viewers#ShootingStars
pic.twitter.com/yAzEwu39J7

At this time, tvN has done little to none to make things right following two very problematic elements. Viewers are saying that so far, the background music used in the Africa scene has been changed, though.

The premiere edition of #ShootingStarsEp1 used a wrong BGM for the Africa scene, and this is immediately corrected in the online edition.

Nevertheless, it already has so many unsettling story elements that it has left a lot to be desired for viewers.