On March 31, netizens worldwide came together to celebrate the marriage of Hyun Bin and Son Ye Jin. They broke the internet earlier in the year when the couple, whose chemistry was first noticed during Crash Landing On You, announced that they be getting married.

The duo had a private ceremony with some of the biggest names in Korean entertainment to celebrate their love for each other. Some pictures have been released from the ceremony and through their official companies. It truly seems like a dream day. 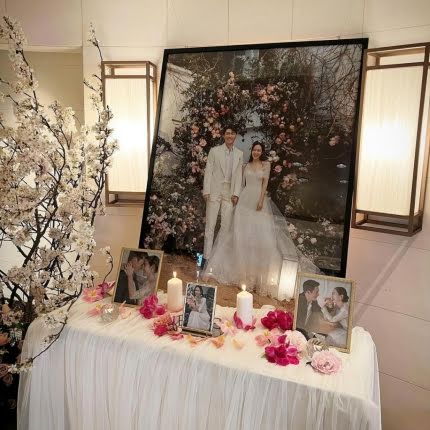 Of course, alongside the beauty of their romance, netizens have rightly been obsessed with the fashion choices of Son Ye Jin throughout the day. Whether it was the pre-wedding photos or the glimpses of her actual ceremony dress, the actress looked like a true fairytale Princess, whatever she wore.

Before the ceremony, VAST Entertainment released two wedding photos of the couple looking magnificent. In one of the photos, Son Ye Jin and Hyun Bin look ethereal against a floral backdrop.

Considering the aura and vibes of the picture, it wasn’t surprising that Son Ye Jin’s dress seemed almost like a fairy or pixie with its simple silhouette but layers of tulle which made it seem magical.

The dress is from Vera Wang‘s Spring 2020 Bridal Collection and was customized to suit Son Ye Jin. Whereas the original piece has a huge flower applique and sheer bodice, Son Ye Jin’s was fully covered with white material and much more minimalistic. According to sources, the dress retails at approximately $ 9,800 USD.

The next image was just as magical and contained even more sparkle and beauty if that was even possible.

Compared to the first picture, this concept looked a lot more like a “wedding” photoshoot, and it could be seen in Son Ye Jin’s dress. Whereas the other dress was flowy and airy, this had a more traditional silhouette and lots of embellishments on the body.

Compared to the previous dress, there is a lot less information on this dress as it comes from Elie Saab‘s Bridal Spring/ Summer 2022 Collection. Although there is no confirmed price due to how new and exclusive it is, the average custom dress from the designer can average ₩80.0 million KRW (about $ 66,000 USD).

One of the final dresses has been seen by netizens before and also appeared on a beautiful table display at the wedding. Son Ye Jin is the brand ambassador for Valentino. Earlier in the month, she did a beautiful photoshoot wearing a dress from Pierpaolo Piccioli’s Valentino Pre-Fall 2022 collection…

Of course, these images made an appearance at the wedding, and the actress looked beautiful in a traditional wedding dress, made unique with the sheer top with floral embroideries. As the collection hasn’t been formally released, the details are a mystery. Son Ye Jin seems to be the first model.

Congratulations to Brand Ambassador #SonYeJin on her wedding day. In a picture by #AhnJooyoung, the actress wore a tulle dress, featuring a sheer top with floral embroideries from Pierpaolo Piccioli’s #ValentinoPreFall22 collection. pic.twitter.com/1Fyf4leZnX

Many of the intricate details are speculated in terms of the actual wedding dress itself. Netizens have tried to find out details through LQ images shared by those at the wedding. Yet, if there is anything netizens are good at, it’s becoming detectives.

It was previously confirmed that Mira Zwillinger would be creating the dress, and from the images seen, Son Ye Jin looked absolutely beautiful in a simple gown layered with tulle and containing intricate floral sleeve details.

According to user @__ekleona on social media, they believe the dress is is the Mira Zwillinger Brunella Wedding Dress from the brand’s Spring/Summer 2022 collection. When the designer was contacted, they explained that the gowns are all custom made to measure and the starting price was $ 11,000 USD but the dress, overskirt and top were sold separately.

Son Ye Jin exuded true elegance and class with her fantastic looks and there are even more that netizens haven’t had a chance to see up close. There is no denying that netizens worldwide will take notes and use her as inspiration for their own special day.

You can read more about the wedding below.