While many of us came to know JYP Entertainment‘s rock band DAY6 through vocalist and lead guitarist Jae (also known as eaJ), MyDays (fans of DAY6) have suspected that the company has not always been supportive of him over the years.

Just this year, he shut down his Twitch channel, and MyDays were suspicious he was forced to. This wouldn’t be the first time either that he ended one of his solo endeavors. In 2018, he ended his jaesix YouTube channel, too (the channel is technically still there but is used occasionally for posting his solo music as eaJ).

Jae has been vocal in the past couple of years about the harsh realities of being a K-Pop idol. Unfortunately, many people use this against him as well, misinterpreting his words, quoting him out of context, etc.

In August, Jae revealed in Twitter Spaces that he does everything on his own, without the help of JYP Entertainment. Whenever he promotes, particularly as a solo artist, he has to organize everything.

I’m getting my setlist together. I have to go hire people, get a band, gotta get people to LED, I gotta get someone to flip my prompter, I gotta get a technician. 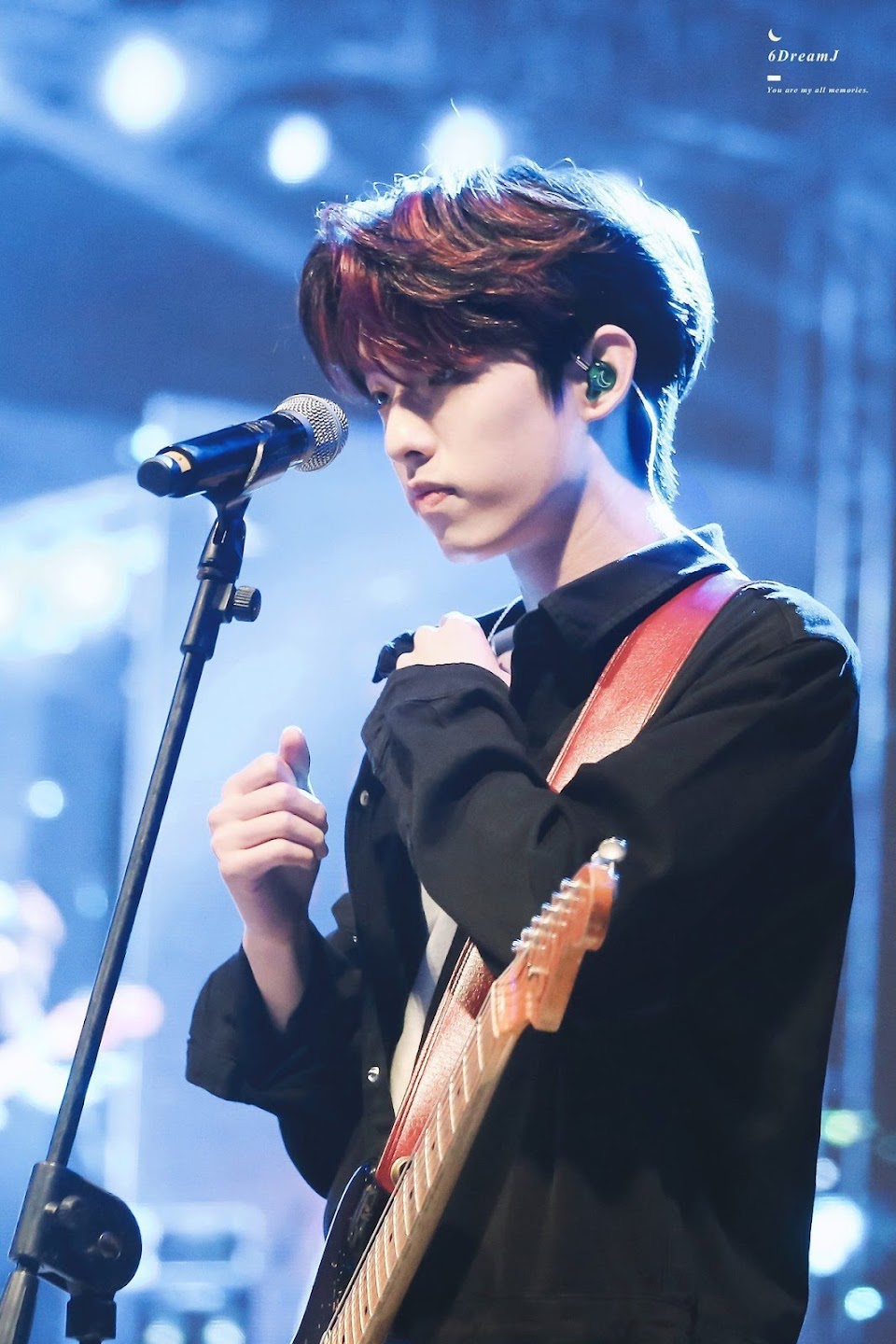 He has also called the company out for not promoting other solo work, such as the DIVE Studios‘ podcast How Did I Get Here? that he hosted. Last year, he retweeted a post from the official DAY6 account, asking why they don’t share any of his solo projects like they do for other members.

Why don’t you repost my dive stuff? https://t.co/OFdcFjhXuM

Shortly after that, Jae revealed in a Twitter post that it was, in fact, JYP Entertainment who had caused him to shut down jaesix despite all his work he put into it. So, that’s why it seems more than likely his Twitch account was shut down too because of the company. This is very unfortunate because not only was it a creative outlet for him, but many fans came to know of DAY6 because of both channels.

On YouTube too, it was all me, doing the work alone for jaesix. The company said things about it, and I had to beg for permission to do it. Even after all of that, they said ‘people within the company don’t approve of it’ and so I had to stop it. Why do the other members get their content expenses covered, management for their schedules, and help from the staff?

He’s been signed to the company for over nine years, but now MyDays suspect he might not be for much longer…

The past few days, Jae has been posting on Twitter, sharing his personal thoughts, causing fans to wonder if something was going on.

On October 4, he explained part of the reason why he is vocal more than ever now. He said that he had been made silent for the past decade.

I just realized the reason I’ve been so vocal about everything is cause I’ve had my mouth shut for the past 10 years and they wont close anymore.

Yea its opinions like this that have made me realize staying here is endangering not only the ones surrounding me but my own sanity. I’ve made decisions so that nobody has to worry about these kinds of things anymore. I genuinely appreciate those of you who helped me understand.

Jae then posted one of his Instagram Lives, asking why a clip from it was taken out of context, framing him to sound anti-vaccine.

Someone just clipped me asking if the vaccine was helping and framed a clip where I sounded like i was against the vaccination… I’m getting my second dosage next week….?? https://t.co/ozjf2x42zf

He followed up by correcting those who sent hate to the original post of the one who posted the video clip while apologizing if he contributed to it in any way.

We really needa stop lunging at people who have misunderstandings and are upset with reason. Stop sending hate, you’re not ‘having my back’ by attacking people. The situation was cleared and the misunderstanding was set straight. My sincerest apologies to anyone that was hurt.

Two days later, Jae held an Instagram Live on October 6. He addressed some of the recent drama and asked people to “chill” and not so quickly cancel anyone.

He has struggled so much with defamation but always endures it. However, this time, he said he actually has contemplated taking legal action against some posts against him.

He told the viewers that he really wanted to protect all involved. He doesn’t want either party to spend money. Instead of going to court, he has other plans for now.

I know you guys want this and this out of me. You guys don’t want me in certain places. You guys will get what you want. Okay?

Fans have been concerned since his next statement, making it sound like he is seriously contemplating ending his contract with JYP Entertainment.

Jae says he feels genuinely upset about how often people try to target or cancel him. He even acknowledged all the comments telling him to delete all of his social media accounts.

He said that he feels that he used his social media platform for good, and one of his main roles as a member of DAY6 was social media marketing.

I’ve given so much heart to DAY6. I’ve given, I’ve worked so hard, especially on social media, and I am by no means saying that I am the sole reason that DAY6… there is no shot without all five members. DAY6 would not be where it is today, but everyone did their part, and my part was social media marketing.

So, naturally, he feels concerned when people tell him to delete all of his accounts, especially considering he has been forced to in the past with others.

He acknowledged that he did make some mistakes during Twitch. Still, he gave his all to each project and contributed a lot of good to the team.

You’re gonna get what you want, I promise. Just give me time. I can’t just get up and leave. It doesn’t work like that, guys.

He pleaded with anyone against him to at least stop attacking his fans and loved ones, even if they are against him.

Jae also revealed that his breaks from DAY6 promotions were never part of his plan. He actually told the others that they could promote without him, and he would join back in about a week.

He said that his team has had his back throughout it all, which meant a lot to him. He truly loves the group.

We ended up taking a break which I am so grateful for because I realized if I went that way I would have probably gotten even more messed up, but my team came through, and they were like, ‘Yo, you not doing it, we’re not doing it, we got you.’

He shared that he misses the days when DAY6 was a full group. He then shared that he was never invited to be part of the sub-unit Even of Day, consisting of Young K, Wonpil, and Dowoon, nor was he asked to join even for the second comeback.

I miss those days when it was still a team. …But I’m not gonna lie, I feel left out. I was never invited to Even of Day.

He was vulnerable from beginning to end, and he continually had to defend mislabeling.

He shared during the live that he feels that all he has left is his solo music, eaJ, which is all completely him. It’s all that he has paid for and worked for. Jae also said that it was never his goal to put in as much for eaJ as he has. Anytime he has been offered features as a solo artist, he first pitches it to DAY6, hoping to promote the group more.

I’ve always sent it to DAY6 first and it was at the point where I stopped getting invited to things. …I totally get it, I must have been a problem in the Korean scene which I’m also very, very interested in who started all those problems because the timing on some of that was impeccable.

He revealed that a lot of the international promotions and PR for DAY6 were done due to his efforts and connections. He got them on BuzzFeed because of a friend he knew.

I know it’s hard to accept that image that you see of me on social media, but that’s exactly who I am. I feel like I’ve done nothing but my best for DAY6 to the absolute best of my ability to the point where I had to fight people in the company for the betterment of DAY6 to get them onto platforms…

He said that he feels like, just like him, the rest of the members are all doing their part to keep DAY6 going. Each member does solo music, radio, and more as well.

They’re working their best too. Don’t hate on them … There’s no one that has done anything wrong…

He concluded the live broadcast, bringing awareness to the mistreatment of idols whose lives are ruined due to anonymous netizens who attack them online. He also wished for success for DAY6 and Even of Day before saying that some decisions are to come…

I want you guys to know that I’ve done everything that I could for them and that … some of you might not like the decisions to come, and I don’t think I do either…

Before ending the Instagram Live, he said that he “shouldn’t go on Live anymore.”

MyDays have since taken to Twitter to bring awareness about the company’s mistreatment and lack of promotions for the group.

I was really happy to see him in the Undertones promotion but that’s it, he never appeared together with the group
but whenever someone hits him up he would always pitch in Day6 first, because they are a team, he was Day6 first before eaj and he knew that 🥺

anyway this is also me pouring my heart out 😊 I’ve been ia here for quite sometime cos ngl stan twt’s been a lil toxic, but i guess we all have to stand up & live up to “mydays being the 6th member of Day6” let’s just chill out & support them in ways that we can 🤗 #hugsforjae pic.twitter.com/D2mKNwwBGx

jae coming on ig live saying he’s having panic attacks, the company (jypee) not inviting him on the comeback of day6, even of day, and not allowing him to promote with the band, him saying he’ll leave day6 soon (pls i hope not). jyp you’re the worst. i’m speechless.