The best-known lower-body movements in the gym both ramp up muscle activation, and inflict a fair amount (or a ton) of muscle damage. Squats, for example. Do them hard, and they’ll build some serious stumps. They’ll also make you sore as hell and limping for a few days.

However, there’s another class of movements that also bring serious muscle activation—and serious muscle pump—but don’t do much in the way of muscle damage. These are, for lack of a better term, eccentric-free exercises, and they’re unique in that they can both build muscle and enhance recovery.

Sled work is one example of a popular eccentric-free leg movement. Cycling is another. Here’s one more I can almost guarantee you haven’t tried: battle rope leg waves.

Battle ropes for the legs? Hear me out. It’s a movement that I haven’t seen anywhere else, but I’ve found immensely beneficial for both myself and my clients. However, I would like to get more people to try it so we can gauge its true value and have a full arsenal of variations.

Ready to do some lower-body beta testing?

Where it came from

My initial experience with battle ropes was back in 2013, when I completed a certification with John Brookfield, the creator of the battling ropes system. Unlike the brief intervals most people are using them for today, we primarily used the ropes at the cert for continuous sets of 1 minute or more. It. Was. Brutal.

It’s Brookfield’s belief that in training longer intervals, we can teach the body to produce speed and power even in a state of fatigue, as well as building lasting mental toughness. Brookfield has performed rope waves for an hour nonstop—the guy is no slouch. After the certification, I went back to the gym I was teaching at, determined to mine battle ropes for all they were worth. One day I was talking to a coworker of mine named Jacen Flynn, a one-time contestant on the Ultimate Fighter and a semi-pro MMA athlete at the time, and we agreed that although we loved the ropes we wished there was a similar exercise to develop the legs.

From there, things escalated quickly. The next thing we knew we were duct taping them to our feet and trying to make waves with the ropes. It was seriously challenging…but seriously inconvenient. Soon, we discovered that if we taped loops in the ends of the rope, we could slide our feet in and out, and when we were done we could just take the tape off with no damage to the rope.

Now we were in business. Everyone we introduced this movement to agreed that it was one of the most physically taxing experiences of their lives. Ever since then, I’ve been practicing and trying to refine the movement. Here are a few lessons I’ve learned about it:

Feel free to come up with your own variations, since this is a new movement to the exercise world. But here are the ones that have been the most useful for me.

Leg kicks: Sit on a box that’s 2-3 feet tall with the ropes around your ankles. Lean back slightly and kick your legs furiously. Imagine you’ve been cast as "victim" in a Jaws reboot and it’s time for your big scene. Straight leg kicks: Sit on a box that’s 2-3 feet tall, lean back slightly and, keeping your legs straight, kick your feet as fast as possible. This variation will torch your core. Crab walk kicks: This variation will work one leg at a time and is useful if you don’t have a plyo box to sit on. Slide your feet through the loops, squat down, and place your hands behind you. You are now in a crab-walk position. From here, kick one leg as fast as possible for the desired length of time. Innie/outie foot waves: Place your feet through the loops, lean back, and move your feet in and out as fast as you can. If you do it correctly, the rope will create waves that travel side-to-side along the ground. You can keep your legs straight, or hold a slight bend at the knees. The farther you lean back, the greater challenge this will pose on your core. This will also develop your inner and outer thighs, possibly preventing the dreaded groin strain. 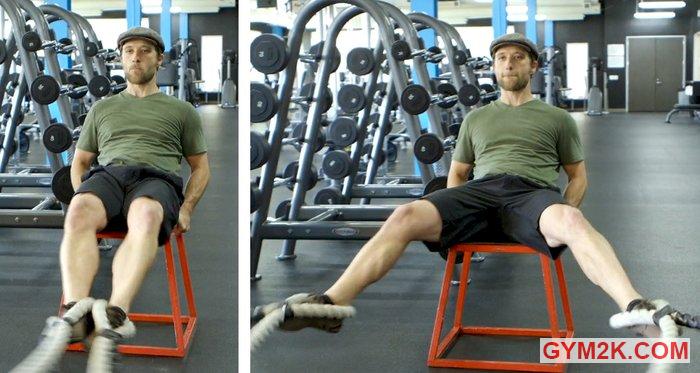 How to program them

Strap in and go hard

Foot waves are a recovery tool that just might make you faster, stronger, and more resilient. In the process, you just might burn a boatload of calories or add a little beef to your thighs. Yes, people will think you’re crazy, but isn’t that what a lot of people thought about great moves that quickly became part of the exercise mainstream? Try it, then judge for yourself. Caffeine: Your Best Fitness Friend Or Your Secret Enemy?